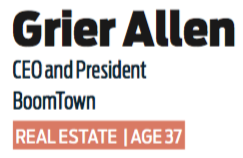 Grier Allen is the co-founder, president and CEO of BoomTown, a sales and marketing platform for real estate professionals that uses patented technology and proprietary algorithms.

The company, founded in 2006, was recognized on the Inc. 500 list of fastest growing companies in 2011, 2012 and 2013. In 2015, the company took on $20 million in funding and in 2016 launched an open platform initiative that provided an API to build an ecosystem of partners to its central platform.

The company’s software is used by 25% of the Real Trends top 500 teams and current partners include BombBomb, Mojo Dialer, RPR and Bandwidth. BoomTown recently released a mobile app, BoomTown NOW.

WHAT IS ONE THING YOU HAD TO OVERCOME TO SUCCEED IN THIS INDUSTRY?

The original ideation for BoomTown began in 2006, but we did not get the product to market until mid-2008. It can be an intimidating issue when the industry you’re trying to service takes a nosedive, you have no institutional capital, and you have mortgaged your home to bring your dream to reality. Thankfully, we had built a product that offered a lifeline: finding buyers online during very tough times ended up being exactly what they needed. As companies became more desperate, they were willing to take a risk and try something new, and the industry as a whole was ripe for disruption.