Seattle is on the verge of becoming the metro with the least inventory, as it constantly finds itself among the hottest metros in the country.

According to the latest housing report from online real estate listing service and broker network, Redfin, Seattle is currently the third-most constrained for inventory, following Oakland and San Francisco.

But the inventory issue impacts more people, as it has the largest population of the three metros.

The city also recorded the largest year-over-year decrease in inventory, down 35% from last April.

As inventory plummeted, the number of Redfin customers making offers surged by 36.9%, showing that the market is more competitive for buyers this year than it was last year.

It’s no surprise, however, given Redfin recently stated Seattle and its neighboring city Tacoma, Washington are two of the five most competitive markets in the country.

“There’s no indication that this market is going to see a drastic increase in supply or a drop in demand, so waiting isn’t an option for a serious buyer,” said Redfin Seattle agent Kyle Moss.

Moss suggested that people intent on purchasing this season should be discerning and focus on the one or two criteria that are most important to them, like commute time and/or schools.

“From there, carve out a list of homes that meet your qualifications and work alongside an agent who has experience winning offers in competitive situations to build and execute a competitive strategy that fits your budget,” he said.

Additionally, the Redfin report gave the latest pulse on the housing market. According to the report, the Redfin Housing Demand Index increased 9.2% from March to a seasonally adjusted level of 121 in April.

The index is based on thousands of Redfin customers requesting home tours and writing offers. A level of 100 represents the historical average for the three-year period from January 2013 to December 2015.

The chart below shows the changes in the Redfin housing demand index since April 2013. 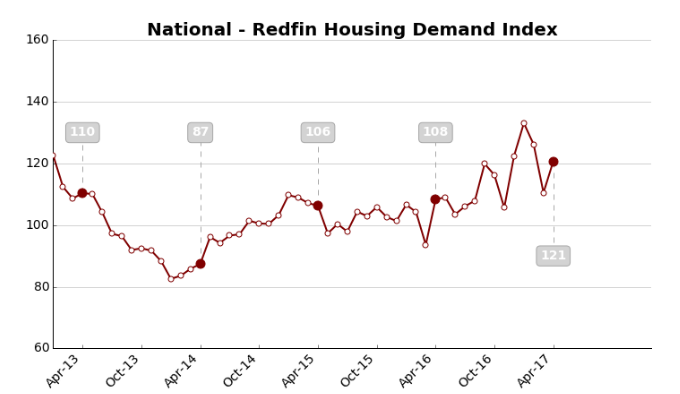 “A pop of new listings only encourages more homebuyers to barge their way into this crowded and competitive, low-inventory market in order to take advantage of still-low mortgage rates,” said Richardson. “For these reasons, we expect prices to continue to grow above their three-year average for the remainder of the year.”

The most recent Case-Shiller home price report also come out on Tuesday, finding that home prices in March jumped to their highest level in 33 months.

The real danger of releasing the GSEs from conservatorship

Dave Stevens writes: My experience with [the GSEs] began in earnest in 1999 when I became the senior vice president in charge of Single Family at Freddie Mac…It was this period that framed my entire perspective of the GSEs and what made me appreciate that they are both critical to housing finance yet equally as dangerous to the same sector and the broader economy.