Home prices, to no surprise, continued their upward trend in March, increasing both year over year and month over month, according to the Home Price Index from CoreLogic, a global property information, analytics and data-enabled solutions provider.

Home prices nationwide, including distressed sales, increased year over year by 7.1% in March 2017 compared with March 2016.

"A potent mix of strong job gains, household formation, population growth and still-attractive mortgage rates in the face of tight inventories are fueling a continuing surge in home prices across the U.S.," said Frank Martell, president and CEO of CoreLogic. "Price gains were broad-based with 90 percent of metropolitan areas posting year-over-year gains. Major metropolitan areas were especially hot with CoreLogic data indicating that four of the largest 10 markets are now overvalued

The chart below shows the changes in home prices since 2002. 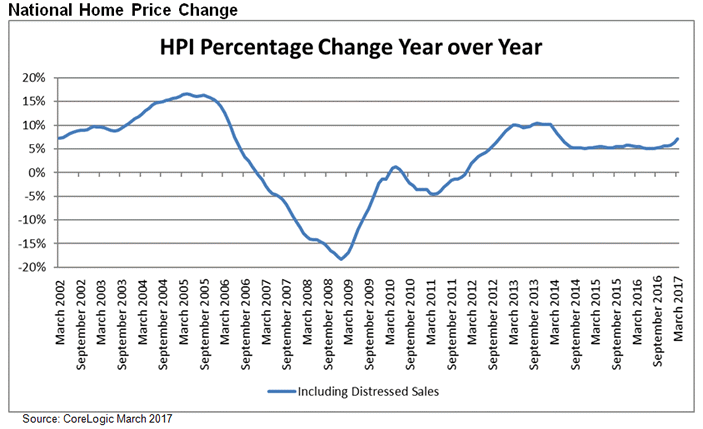 Frank Nothaft, chief economist for CoreLogic, explained what this means for the future of home prices.

"Home prices posted strong gains in March 2017, and the CoreLogic Home Price Index is only 2.8% from its 2006 peak," said Nothaft. "With a forecasted increase of almost 5% over the next 12 months, the index is expected to reach the previous peak during the second half of this year. Prices in more than half the country have already surpassed their previous peaks, and almost 20% of metropolitan areas are now at their price peaks.”

“Nationally, price growth has gradually accelerated over the past half-year, while rent growth for single-family rental homes has slowly decelerated over the same period, according to the CoreLogic Single-Family Rental Index, recording a 3% rise over the year through March," he concluded.