While low housing inventory and slow wage growth are par for the course in California, the state pushed past those roadblocks to record a strong start to the year, according to the California Association of Realtors’ latest report, which collects data from more than 90 local Realtor associations and MLSs statewide.

CAR noted that the statewide sales figure represents what would be the total number of homes sold during 2017 if sales maintained the March pace throughout the year. It is adjusted to account for seasonal factors that typically influence home sales.

The chart below shows the total sales of existing, single-family detached homes in California, dating back to January 2005. 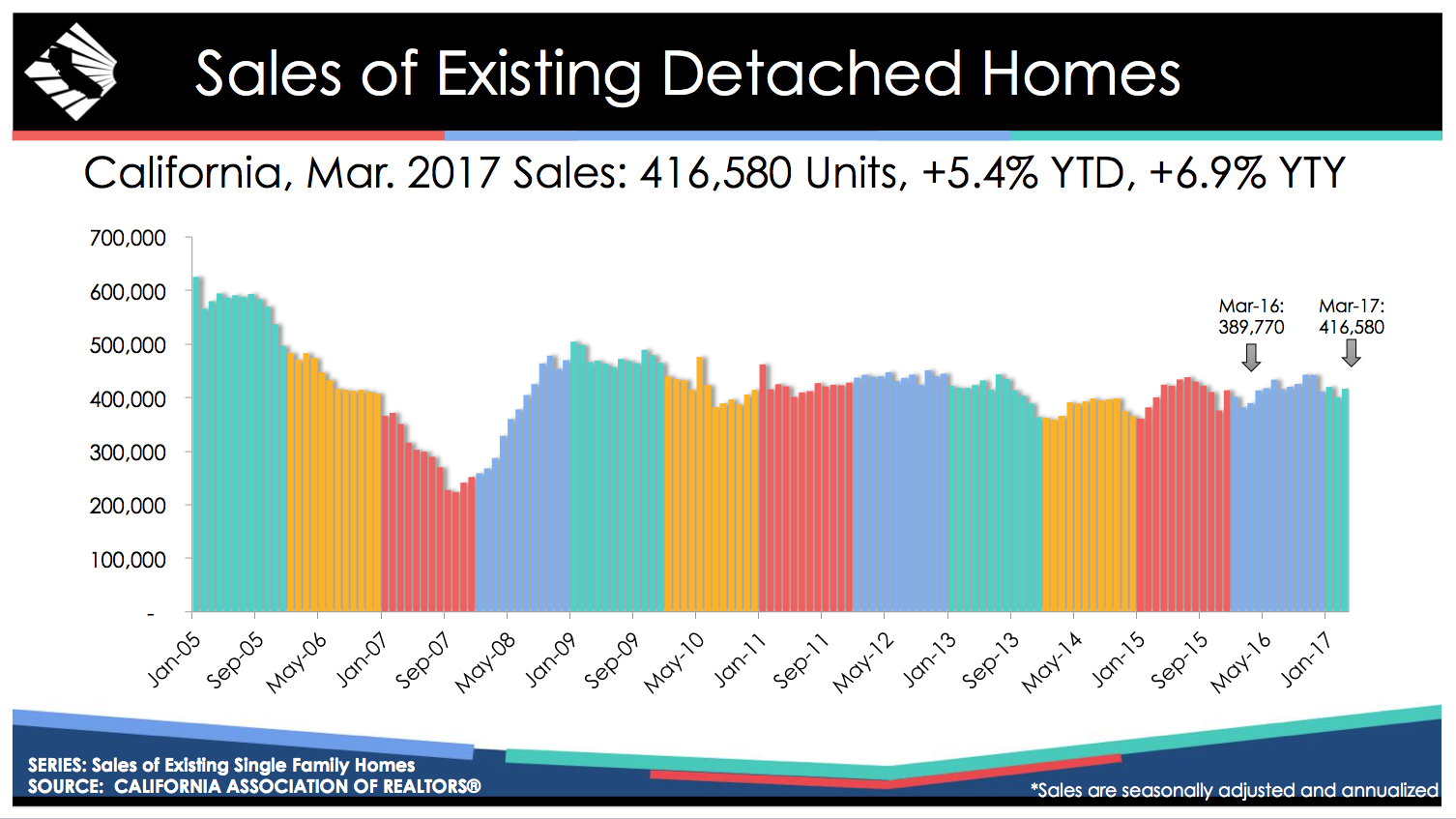 “March’s solid sales performance was likely influenced by the specter of higher interest rates, which may have pushed buyers off the sidelines and close escrow before rates moved higher,” said CAR President Geoff McIntosh. “The strong housing demand, coupled with a shortage of available homes for sale, is pushing prices higher as would-be buyers try to purchase before affordability gets worse.”

In fact, CAR’s Unsold Inventory Index is at its lowest level so far this year and the third lowest level in more than three years due to the substantial decline in new listings combined with March’s robust sales.

The index, which measures the number of months needed to sell the supply of homes on the market at the current sales rate, plummeted a full month to 3 months in March from 4 months in February.

For added perspective, the index stood at 3.6 months in March 2016.

Meanwhile, the median price of an existing, single-family detached California home increased to more than $500,000 in March, rising to $517,020.

But despite rising home prices, CAR Senior Vice President and Chief Economist Leslie Appleton-Young is still optimistic on the future of the state’s housing market.

“The spring home-buying season is off to a good start, as the economic and market fundamentals remain solid for the most part,” said Appleton-Young. “However, higher interest rates, a dearth of housing inventory, and slow wage growth will continue to have an adverse effect on housing affordability that is putting upward pressure on home prices, and is sure to hamper the market throughout the year.”

CAR isn’t the only one still positive eon the state’s future. The most recent report from PropertyRadar argued that the extreme rise in California home prices is not a sign that the housing market is in a bubble and about to pop.