The updates to the leading Republican effort to replace the Dodd-Frank Wall Street Reform and Consumer Protection Act are out, which include possible changes to the leadership structure of the top housing agencies.

A memo first came out on potential plans reportedly from House Financial Services Committee Chairman Rep. Jeb Hensarling, R-Texas, back in February, revealing an even more aggressive version of the Financial CHOICE Act.

That memo showed that the Consumer Financial Protection Bureau was facing some of the most dramatic changes under the updated Act.

Previously, the CHOICE Act 1.0 proposed leadership changes for not only the CFPB, but the Federal Housing Finance Agency, the Office of the Comptroller of the Currency, Federal Deposit Insurance Corporation and the National Credit Union Administration as well.

But looking over the new summary (found here) of the CHOICE Act 2.0, the language walks back a lot of the initial CHOICE Act 1.0 proposals.

According to the summary of bill changes, the original CHOICE Act would restructure the FHFA and OCC as bipartisan commissions. The FDIC would be reorganized as a bipartisan commission with all five commissioners appointed by the president, and both the Comptroller of the Currency and the CFPB director would be removed from the FDIC board. Also, NCUA board of directors would be increased from three members to five.

The new CHOICE Act 2.0 cuts a lot of those proposed changes, and instead, the FHFA director would be removable at will by the president, with no changes to the current law regarding OCC and NCUA. The FDIC structure would stay the same as proposed in CHOICE 1.0.

One of the most noteworthy changes in the CHOICE Act 2.0 is its stance on the CFPB leadership structure.

The original CHOICE Act replaced the director of the CFPB with a Consumer Financial Opportunity Commission, a bipartisan independent Commission serving staggered terms.

The chart below breaks out the changes specifically regarding the CFPB, including its leadership, structure and authority. 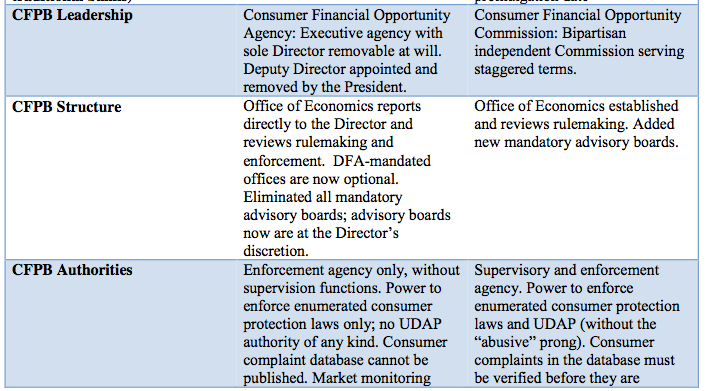 The updated act also includes an updated note for credit unions. While the original CHOICE Act established a CFPB Credit Union Advisory Council, the updated one removed it because the bill eliminates mandatory CFPB advisory committees.

Sarah Rozier, communications director for the Financial Services Committee, provided the following comment on the updates, "Chairman Hensarling looks forward to working with the president and his administration to eliminate Dodd-Frank and replace it with the Financial CHOICE Act. Our plan, which will be released in the next few weeks, is a bold and visionary plan that protects consumers by holding Wall Street and Washington accountable, ends bailouts and unleashes America's economic potential."

The timing of the bill fits well with recent talk from President Donald Trump on reforming Dodd-Frank.

Earlier this week, Trump told a gathering of CEOs that a full repeal of Dodd-Frank is a possibility, and last week, Trump told a group of CEOs that his administration is planning a “very major haircut” on the Dodd-Frank Wall Street Reform Act. And it was hardly the first time that Trump and members of his administration spoke of regulatory reform.