In 2013, Fannie Mae and Freddie Mac began shifting credit risk to investors as part of a plan to reduce the overall risk of the government-sponsored enterprises, and therefore, the risk to the American taxpayers.

And a new report published Monday by the Federal Housing Finance Agency shows how much progress the GSEs are making in their collective effort to protect the taxpayers from risk.

According to the FHFA report, in 2016, the GSEs transferred $18.1 billion of credit risk on mortgages with $548 billion in unpaid principal balance through capital markets, insurance, and pilot credit risk transfer transactions.

That’s an increase from 2015, when the GSEs transferred $16.1 billion of credit risk on mortgages with $420.4 billion in similar transactions.

In total, the GSEs have now transferred nearly $49 billion of credit risk on $1.4 trillion in unpaid principal balance since the risk-sharing programs began, as seen in the graph below from the FHFA report. 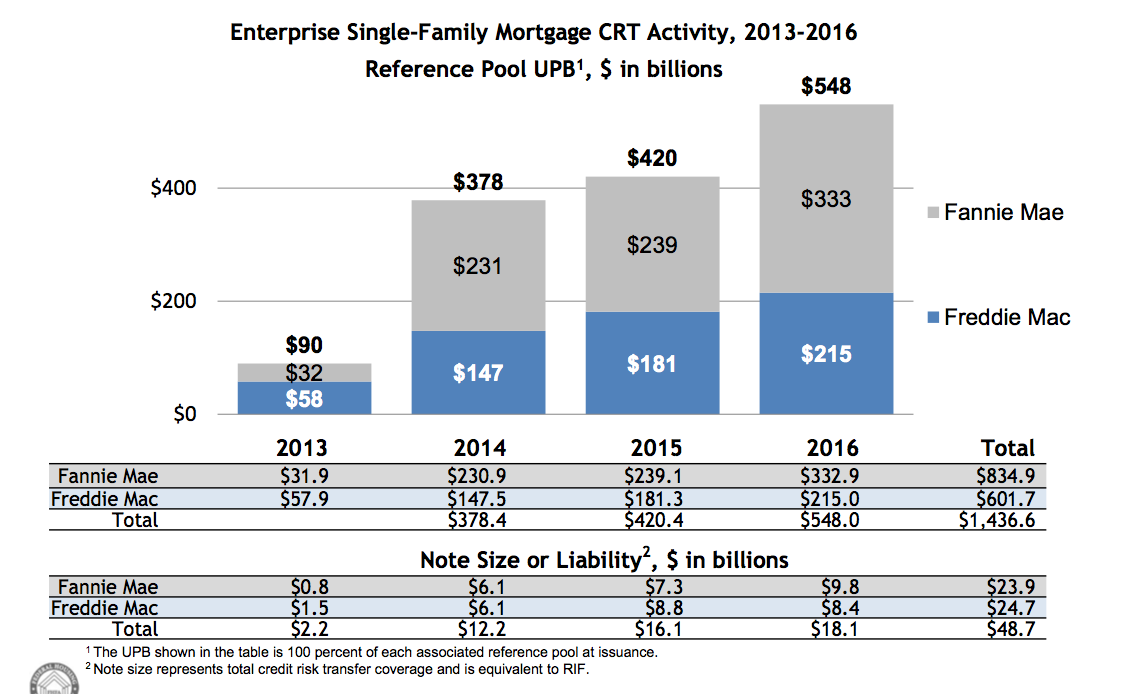 “Fannie Mae and Freddie Mac have made credit risk transfer a regular part of their business and they continue to improve and expand the scope of their programs and explore different transaction structures,” said FHFA Director Mel Watt. “This report demonstrates the ongoing innovation, the progress being made, and our commitment to transparency as we continue to enhance these programs.”

The FHFA report also noted that Freddie Mac began selling a portion of the first dollar of expected credit losses in 2015 and did so again in 2016.

The report also adds that Fannie Mae began selling a portion of the first dollar of expected credit losses in 2016.

The FHFA said in the report that both GSEs will continue to explore these and other options for risk-sharing.