Speaking before a meeting with airline executives, President Donald Trump said Thursday that his administration plans to unveil a tax reform plan in the coming weeks, with changes to corporate and personal taxes likely on the agenda.

According to a report from Business Insider, Trump said:

"We're going to be announcing something over the next — I would say — two or three weeks that will be phenomenal in terms of tax," said Trump during a meeting with airline executives on Thursday.

The president also said he is "lowering the overall tax burden on American businesses big league."

Previously, the president spoke of cutting the corporate tax rate from the current federal statutory rate of 35% down to somewhere between 15% and 20%.

While those changes would likely be well received by corporate America, there could be some unintended consequences for two companies that have close ties to the federal government.

According to a new report from Fitch Ratings, cutting corporate tax rates by as much as the president suggested could lead to Fannie Mae and Freddie Mac needing another bailout from the government.

Per the terms of the Preferred Stock Purchase Agreements that went into effect when the government took the government-sponsored enterprises into conservatorship, Fannie and Freddie send dividends to the Department of the Treasury each quarter that they are profitable.

But under the PSPAs, the GSEs are prohibited from rebuilding capital and each of the GSEs capital base is required to be reduced over time, with their capital reserves scheduled to be drawn down to $0 in 2018.

And with each of the GSEs lower base of capital, Fitch’s report suggests that a reduction in the corporate tax rate could lead to significant deferred tax asset write-downs for both of the GSEs, which, in turn, could lead to the GSEs need an additional draw from the Treasury to cover the tax-related losses.

Additional capital draws from the US Treasury would not change Fitch's current view of the ratings, unless total draws start approaching the cap, which is highly unlikely even with potential deferred tax asset write-downs.

The remaining funding available to Fannie Mae and Freddie Mac (from the Treasury) totaled $258.1 billion at Sept. 30, 2016.

As Fitch’s report notes, both Fannie and Freddie’s deferred tax asset far exceeds each of the GSEs net income through Sept. 30, 2016, as shown in the graphic below: 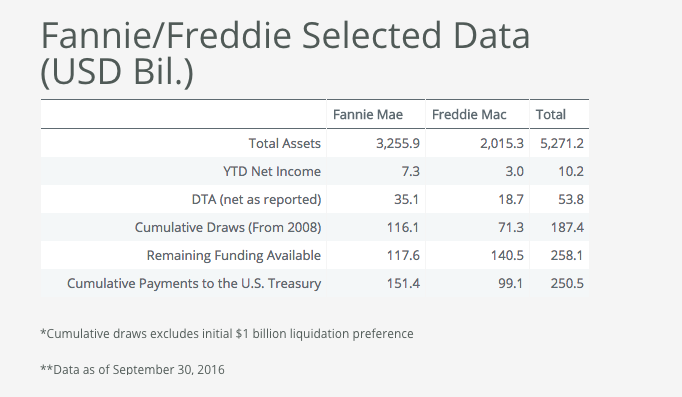 And while a tax cut would help each of the GSE’s long-term profitability, that same tax cut could cause a “one-time hit” to earnings, Fitch notes.

“The GSEs determined in the past that it was more likely than not that their net DTAs would be realized,” Fitch continues. “Therefore, a valuation allowance was not necessary. However, a legislative change resulting in a lower federal corporate income tax rate could result in write-downs.”

Fitch’s report lays out three scenarios for what could happen if the corporate tax rate is cut. For example:

Fitch estimates that if the applicable corporate tax rate is reduced to 20% from the current 35%, Fannie Mae and Freddie Mac would write down their DTAs by $15.0 billion and $8.0 billion, respectively.

Here are the other scenarios: 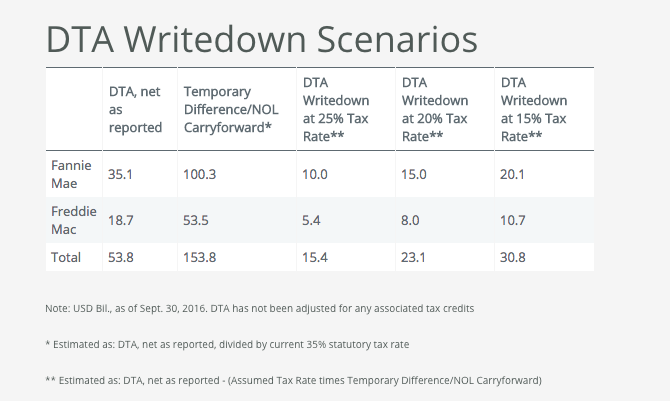 But as Fitch notes, some of that loss could be offset by lower taxes in the future.