Home price growth isn’t letting up anytime soon as the latest report from CoreLogic shows prices increased by 7.1% in November 2016 compared to a year ago. And the trend is predicted to continue into 2017.

According to an analysis of CoreLogic’s report by Matthew Pointon, property economist for Capital Economics, annual growth hasn’t exceeded 7% since May 2014.

On a monthly basis, home prices increased month over month by 1.1% in November 2016 compared to October 2016.

The chart below shows the national home price change since May 2002. 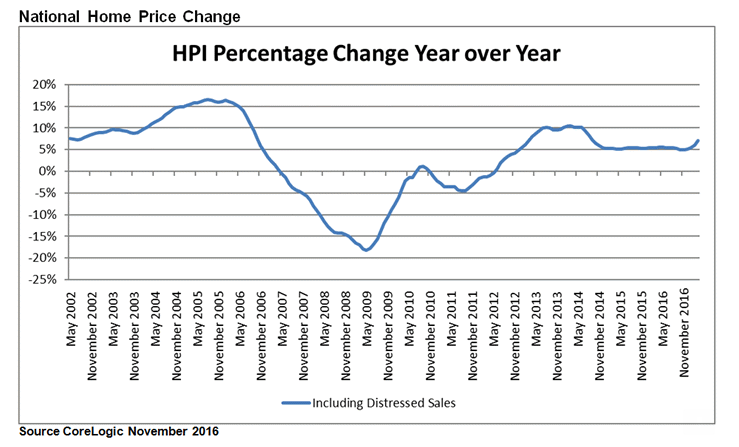 "Home prices continue to march higher, with home prices in 27 states above their pre-crisis peak levels," said Anand Nallathambi, president and CEO of CoreLogic. "Nationally, the CoreLogic Home Price Index remains 4% below its April 2006 peak, but should surpass that peak by the end of 2017."

Since it will take some time for inventory levels to rise, which will put upward pressure on house prices, Capital Economic predicts prices to rise by around 5% over 2017, close to what looks set to be a 6% rise over 2016.

In comparison, CoreLogic forecasted an increase of about 5% in home prices in 2017. However, some neighborhoods could even see double-digit growth while others may decline.

Brown, a real estate broker/owner in the Greater Charlotte, North Carolina area, shares how she navigated past downturns and her advice for fellow Realtors today.