This is the first time the average 30-year fixed-rate mortgage has topped 4% since 2015.

The 10-year Treasury yield started increasing after the election, a sign that mortgage rates would likely follow suit.

The 5-year Treasury-indexed hybrid adjustable-rate mortgage averaged 3.12% this week, increasing from last week’s 3.07%. A year ago, the 5-year ARM averaged 3.01%.

The chart below shows the changes in these three products since November 2015. 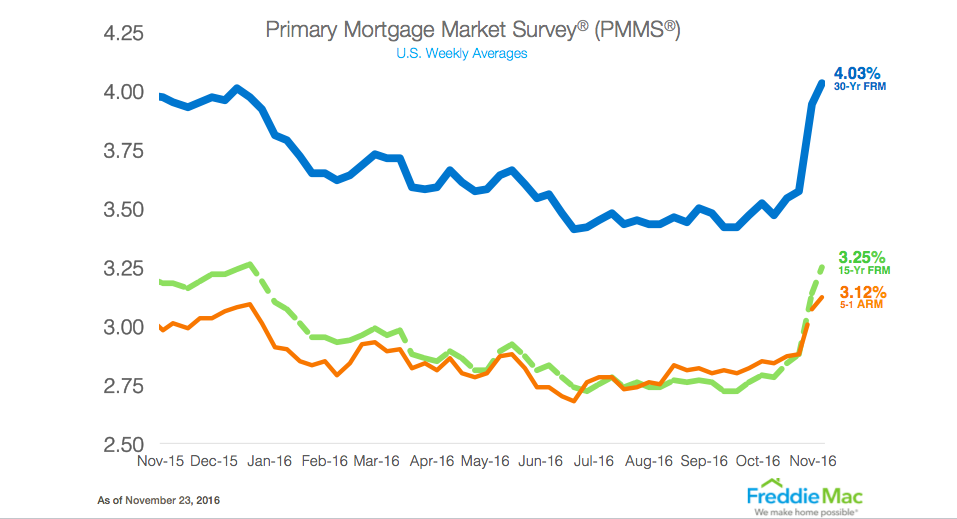 The Freddie Mac report echoes the most recent Mortgage Bankers Association’s Weekly Mortgage Applications Survey, which posted that the 30-year mortgage rate recorded its highest weekly average since the beginning of 2016. It is important to note that the MBA survey timeline is slightly different and is for the week ending Nov. 18.

The MBA report posted that the average contract interest rate for 30-year fixed-rate mortgages with conforming loan balances ($417,000 or less) increased to its highest level since January 2016, 4.16%, from 3.95%.

Shant Banosian, the nation’s No. 1 loan originator, has become Guaranteed Rate’s first loan officer to fund $1 billion in loan volume in one year. Over the course of his decade-long career, Banosian has generated more than $4 billion in funded loans.