The private mortgage insurance business in the third quarter thrived, judging by the financial results of two of the top insurance companies in the industry.

Both Arch MI and Radian posted their results Thursday morning, which gave a strong indication of the state of the mortgage insurance industry.

New mortgage insurance written surged and increased to $15.7 billion for the quarter, representing record volume of new insurance written on a flow basis for the company, and an increase of 40% compared to $11.2 billion in the prior-year quarter.

Radian’s CEO S.A. Ibrahim commented on this saying, “We set a record for Radian in the third quarter, writing the highest volume of new flow mortgage insurance business ever in our 40-year history, adding to our existing high-quality insurance in-force book.”

“Our company continued to benefit from positive credit trends, including another decline in our total number of delinquent loans, high quarterly cure rates and continued outstanding performance from our newest books of mortgage insurance business,” he continued.

And the boom isn’t exclusive to Radian.

Arch MI U.S. generated $8.75 billion of new insurance written during the 2016 third quarter, of which 79% was from banks and other non-credit union mortgage originators.

In its report last quarter, Arch MI stated that approximately two thirds of the increase in gross premiums was in Australian mortgage reinsurance but expected to the U.S. segment to start to continue to scale in size.

The chart from Arch MI sums up the company’s mortgage segment financial results. 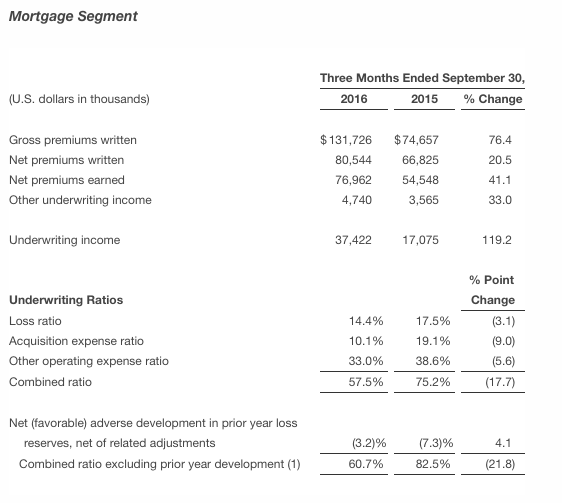 In the week following historic winter storms in the south, mortgage applications increased .5%, according to the Mortgage Bankers Association.