Despite its ongoing investigation into its massive fake account scandal, Wells Fargo still managed to beat earnings expectations in the third quarter of 2016 as mortgage originations helped boost the bank’s results.

The bank’s revenue increased 2% to $22.3 billion, up from $21.9 billion in the third quarter of 2015, with mortgage originations a main driven behind this growth.

Even with lower rates, Wells Fargo stated that many of its businesses had their best noninterest income result in 5 quarters, including mortgage banking.

Even with lower rates, Wells Fargo stated that many of its businesses had their best noninterest income result in 5 quarters, including mortgage banking. 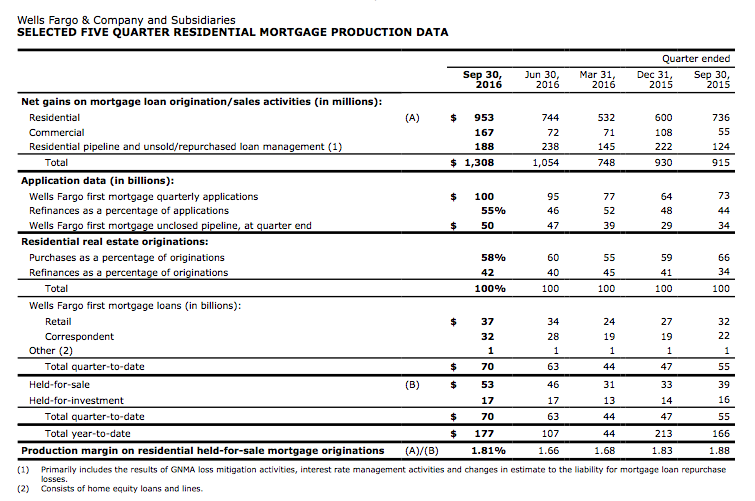 “While expenses increased from second quarter, credit results improved from the prior period led by strong performance in consumer real estate and improvements in our oil and gas portfolio,” Shrewsberry added.

“Capital remained strong and our net payout ratio was 61% in the quarter, as we returned $3.2 billion to shareholders through common stock dividends and net share repurchases. We will continue to monitor impacts from the recent sales practice settlements to our business activity levels," he concluded.

Wells Fargo didn’t hide the news of its massive accounts scandal or the recent departure of its former Chairman and CEO John Stumpf, noting both items before jumping into its financial results.

At the core of the fake account scandal surrounding Wells Fargo right now is the fact that more than 5,000 of the bank’s former employees opened more than 2 million fake accounts to get sales bonuses.

Earlier this week, and after calls from the government, Stumpf announced he would step down as CEO after 34 years of service. The Board elected Tim Sloan, the company's president and chief operating officer, to succeed him as CEO.

"I am deeply committed to restoring the trust of all of our stakeholders, including our customers, shareholders, and community partners. We know that it will take time and a lot of hard work to earn back our reputation, but I am confident because of the incredible caliber of our team members. We will work tirelessly to build a stronger and better Wells Fargo for generations to come,” said Sloan in the earnings report.

The Mega bank and top mortgage originator in the country is working in overdrive to rebuild its trust among its borrowers.

Earlier this week as well, the bank sent out a letter to its consumers apologizing for the recent events and explaining what the it is doing to rectify the situation, including its recent change to eliminate sales goals.

While the bank announced a new CEO and eliminated sales goals, among other things, it still has a long road to recovery. Wells Fargo is currently facing heat from the House of Representatives, the Senate, the Consumer Financial Protection Bureau, the Office of the Comptroller of the Currency, various states and municipalities, and maybe even the Department of Justice.