Despite the growing prominence of low down payment mortgages, first-time homebuyers believe they need to put 20% down to compete in today’s market, but it’s not true given current market conditions, according to real estate agents across the country.

Redfin conducted a survey between Sept. 15 and Sept. 18, receiving responses from 762 real estate agents in 38 states and Washington, D.C. The results found that more than half of the real estate agents surveyed said the typical down payment for successful buyers in their market was less than 20%.

In fact, one in four said a down payment between 3% and 5% was typical among successful buyers.

This chart from Redfin displays the typical down payment for successful buyers in the market. 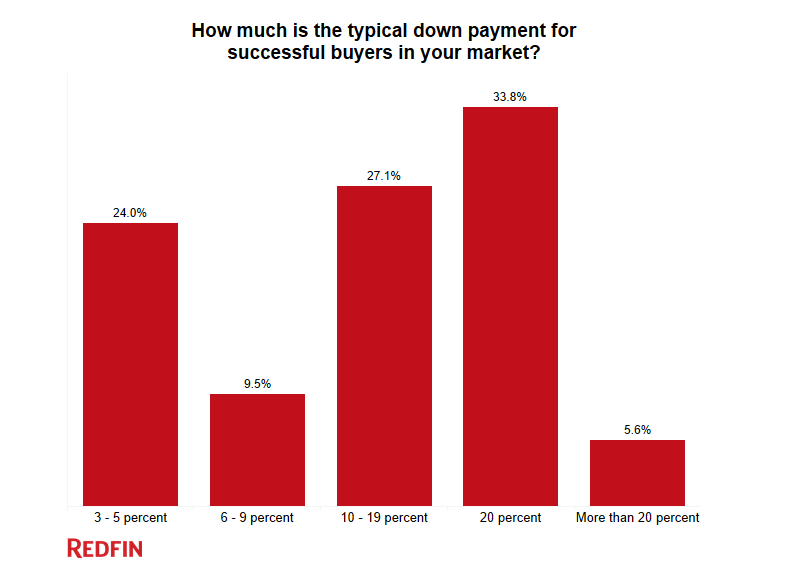 It’s a common misconception for borrowers to think they need to put 20% down on a mortgage, which often becomes the biggest roadblock to homeownership.

And in addition to this, markets across the country are plagued by continued lack of inventory, making borrowers believe a higher down payment will help them compete against other buyers.

But according to Redfin, success with a low down payment is possible even in highly competitive markets.

The survey found that 22% of Redfin agents in California, a state notorious for bidding wars and high prices, said their clients were successful with 3% to 5% down.

“The conditions that challenged first-time and Millennial homebuyers this spring are starting to ease,” said Redfin chief economist Nela Richardson. “There are fewer bidding wars and less of a need to escalate significantly above the list price to get an offer accepted.”

Richardson explained that the pace of the market is also slowing, which helps buyers since they can now afford to be patient.

The latest report from CoreLogic recorded that cash sales fell to less than 30% for the first time since the housing crisis began.

And sellers are also adjusting and learning about the growth of low down payment products.

Approximately, 61% of respondents said they had advised sellers that the highest offer is not necessarily the best.

“Sellers are getting used to the idea that all-cash buyers and investors have given way to traditional buyers who need financing to purchase a home,” said Richardson. “They are demanding less from buyers than they were just a few months ago, which means a wider spectrum of buyers and down payments can be successful now.”

Roddy de la Garza, a Redfin real estate agent in Los Angeles who is included in the 61%, commented on the news and said, “One major piece of advice I always give to sellers is that the highest offer is not necessarily the best. You have to look at the whole package. If a buyer has a low down payment but comes in with a fully pre-approved and underwritten loan agreement from their lender, and agrees to waive the appraisal contingency, that’s practically as good as cash.”

This change is good news for first-time buyers and Millennials as low down mortgages become the new normal.

Mat Ishbia, CEO of United Wholesale Mortgage, recently explained to HousingWire that 3% down mortgages will be the new normal.

The upcoming October issue of HousingWire magazine zeros in the idea low down mortgages, expanding on how banks of all sizes are implementing and originating the low down product. Check back here at the beginning of the month for a link to the piece to see how lenders are doing the 3% down.

Ultimately for borrowers unsure if they should so a 3% to 5% down mortgage, Tracy Salisbury, a Redfin real estate agent in Seattle, said, “Talk to a lender now and become educated on all of your options, even if you don’t think you’re able to buy. You might be surprised at the possibilities.”