Where are we in the credit cycle? Are there more “bubbles” (bonds, subprime auto, student loans) lurking out there? How will credit markets react to the upcoming election? Has the pendulum swung too far when it comes to mortgage underwriting? Are debt preferences really changing? Is the regulatory environment too strict, not strict enough, or just what we deserve?

These were some of the questions raised and answered during the opening session and the first day at the ABS East Conference that began this week in Miami.

Steve Eisman, the angry money manager from “The Big Short”, was at this year’s conference. This time not as the angry heckler, but as the opening keynote speaker.

Eisman reminded the packed ballroom how, in his opinion, greed, leverage and porous underwriting standards led to the mortgage meltdown. The reaction to this crisis, he said, has led to a new paradigm in mortgage lending, which currently may be too restrictive in terms of underwriting and may take up to 10 years to “workout the kinks.”

While he expressed concern about the high levels of leverage in European banks, he didn’t feel that student debt and/or subprime auto loans were as potentially dangerous as the housing/mortgage bubble.

When asked whether all the new post-mortgage crisis regulations were fair, he responded (in a fashion that would have made Steve Carell proud): “Tough [expletive], you blew up the planet! Shut up and move on!”

As they say in show business, Eisman was a tough act to follow.

The show must go on

We were charged with taking a broad look at a wide spectrum of credit markets and trying to predict how they’d react to interest rate hikes, the upcoming election, demographic trends and potential credit problems.

Here are some of the macro highlights:

As the group’s housing economist, it fell to me to tackle the questions: How tight is underwriting? And what’s happening within the origination market?

To answer the first question, we went back and looked at default rates (defined as 90-or-more days late or in foreclosure proceedings) for seasoned loans of various vintages.

At their five-year point, loans originated post-2009 currently have exceptionally low defaults. Defaults are even lower than 15 years ago, before underwriting standards loosened during the housing boom—underwriting is tighter now. 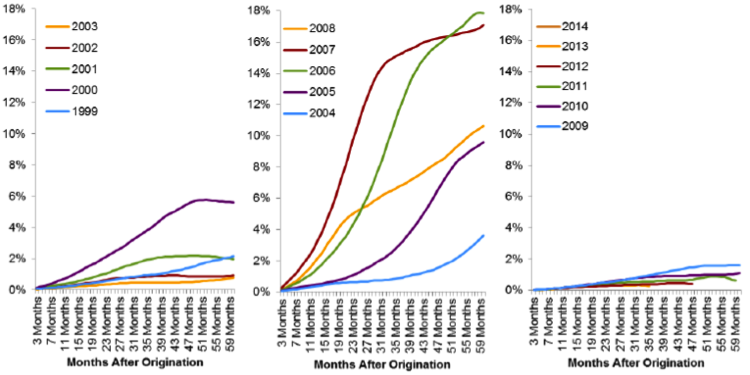 (Source: CoreLogic True Standings; the serious delinquency rate is the percent of loans outstanding that are 90-or-more days delinquent or in foreclosure proceedings.)

My fellow panelist, Jennings, agreed: “Mortgage quality doesn’t get any better than it is now.”

Another observation that I shared with the audience: it’s hard to stay on top, at least when it comes to mortgage origination.

Over the past 10 years, the makeup and the market share concentration of the top 10 lenders has been a moving target. Looking at the top 10 circa 2006, 2011 and 2016, only three companies have been in all three lists: Wells Fargo, JPMorgan and Bank of America. Some of the companies were casualties of the mortgage meltdown.

And the market share concentration of the top 10 has fluctuated, peaking in 2011 at 33% and now dipping to 23%. And in the everything-old-is-new-again spirit, non-banks originators are back and taking share. Currently, they make up 5 of the top 10. 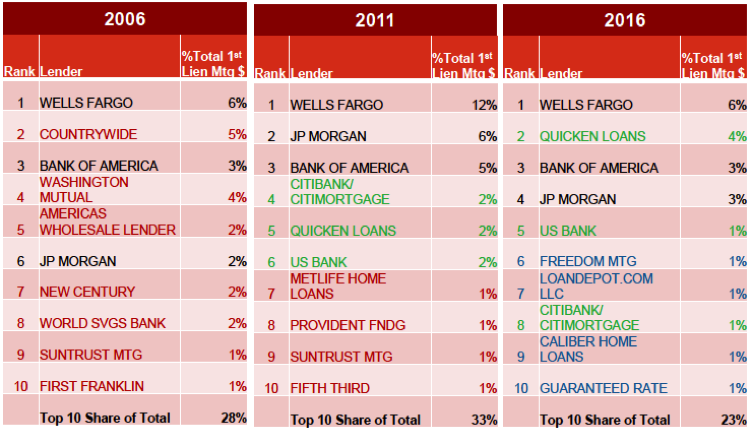 (Source: CoreLogic Marketrac as of August 2016)