Ocwen Financial got the official go-ahead from the Office of Mortgage Settlement Oversight to lift the foreclosure sale hold placed on more than 17,000 loans earlier this year after it mailed corrected loan modification denial notices to affected borrowers and provided a sufficient timeframe for the borrower to appeal the denial.

According to the most recent third and fourth quarter 2015 oversight report from Joseph Smith, monitor of the National Mortgage Settlement, “After Ocwen mailed corrected loan modification denial notices to affected borrowers in May 2016 and provided a sufficient timeframe for borrowers to appeal their denials, I permitted Ocwen to lift the foreclosure hold in July 2016.”

At the end of April 2016, Smith required Ocwen to place a hold on foreclosure sales on 17,300 loans because of significant errors in loan modification denial notices sent to borrowers.

While the issues date back to a report released in October 2015 on the second half of 2014, Ocwen was still not yet back in compliance with one of the performance metrics it failed.

Metric 31, the metric Ocwen failed to correct, tests whether the mortgage servicer sent a loan modification denial notification to a borrower that included the reason for the denial, the factual information considered by the servicer in making its decision and a timeframe by which the borrower can provide evidence that the decision was made in error.

Smith’s office stated that Ocwen “was delayed” in implementing its Corrective Action Plan for the failure of Metric 31 because of “difficulties in resolving the technical issues that led to the original fail.”

And because of those issues, Ocwen had to place 17,300 loans that "could have been affected" by this issue on foreclosure hold.

It's important to note that when first reported back it April, the NMS stated that 17,496 were put on hold. However, the number dropped to 17,300 in the latest update due to variety of reason, the NMS explained.

When the news came out in April, Ocwen responded to Smith’s office and the nature of the sanctions that Smith’s office placed on it, saying, “Ocwen takes borrower harm very seriously and worked with Office of Mortgage Settlement Oversight to place certain loans on a hold to ensure that no foreclosure sale would take place until OMSO reviewed and validated that all matters associated with Metric 31 were resolved.”

“These holds are not ‘frozen foreclosures’ but rather an agreement not to foreclose until OMSO reviewed and approved Ocwen’s remediation,” Ocwen continued. “Many of these loans have never been referred to foreclosure and never will be. The company has already resumed internal testing of Metric 31, and expects future OMSO reports will reflect that its concerns are resolved.”

According to Ocwen, it referred over 19,000 loans to foreclosure and completed approximately 7,000 foreclosures in the first quarter of 2016, while completing more than 16,600 loan modifications.

Now that the hold is lifted, Ocwen commented on new report saying, “Ocwen is committed to taking all necessary actions to be complaint with the National Mortgage Settlement. Ocwen has made significant investments in our risk and compliance management infrastructure to ensure that we are compliant with all rules and regulations related to our business. We will continue to work closely with the Monitor and look forward to the next report.”

Ocwen also noted that Metric 31 Correction Action Plan, which was discussed in the previous Monitor’s report, has been satisfactorily completed and the associated foreclosure holds have been lifted. 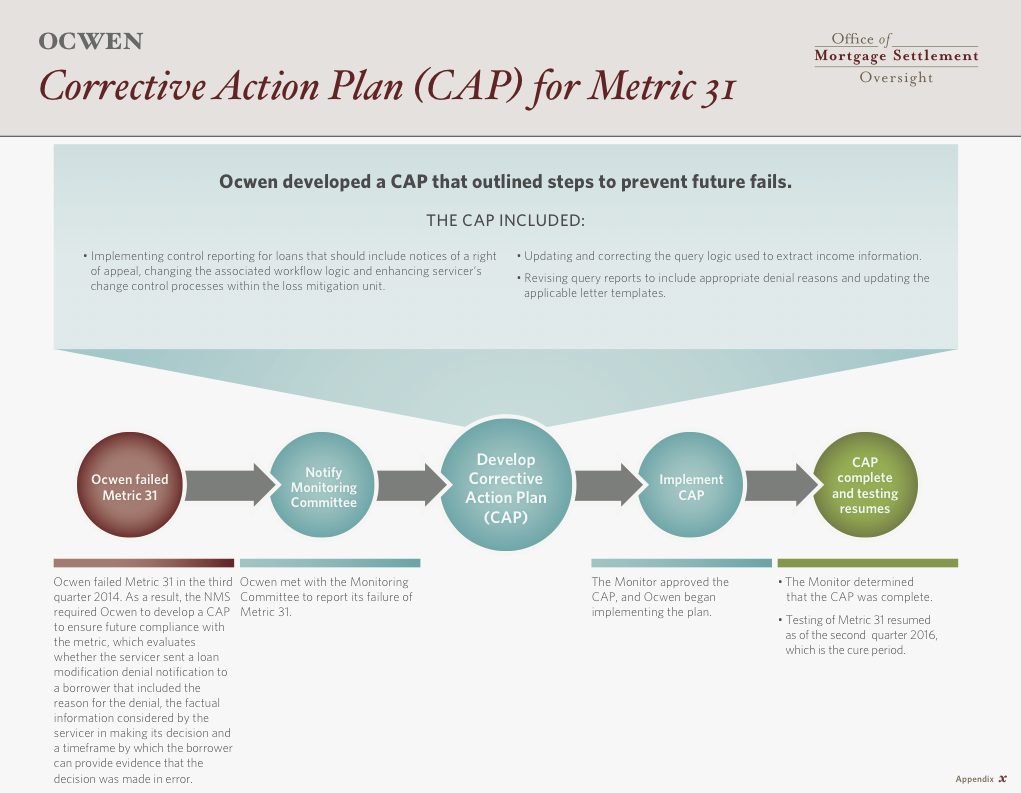