While the Federal Housing Finance Agency says housing prices are going up and that it’s the best year-on-year rate in years, some of those who experienced the boot heel of the subprime mortgage crisis are likely not as enthusiastic.

A new report from the Urban Institute Housing Finance Policy Center offers a valuable glimpse at what has happened to the U.S. population's housing and credit status since the turn of the century. Of particular interest: A group of about 19 million renters who, at some point in the past 16 years, used to be homeowners.

Due to a ton of reasons such as moving to another city or state for a job, — or they just couldn’t keep affording their homes — former homeowners are not uncommonly forced into renting instead.

The report states that they are mostly middle-aged, unusually likely to have foreclosures or other black marks on their credit records, and are concentrated in bubble states such as Arizona, California and Florida. 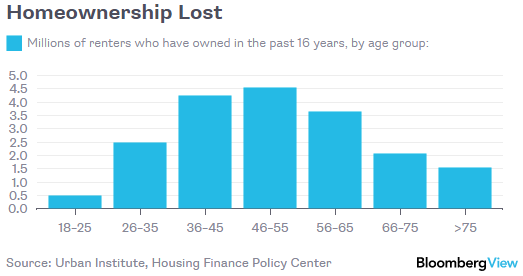 Even though rent appreciation is finally projected to cool down in 2016, giving renters a much-needed break from what seemed to be never-ending price increases, Whitehouse also states that for some housing refugees, homeownership still remains mostly out of reach and leaves them vulnerable to rent increases.

Having decent credit is another obstacle a future homeowner needs to tackle, the article also states that as of 2015, about 45% of renters who had a mortgage had credit scores 650 or lower, which is not a good thing if you want to apply for a mortgage. What’s even worse is that of the group of renters who’ve never had a mortgage, it came close to 57%.

For home shoppers who need to improve their credit score ASAP to get a leg up against competition or take better advantage of current-low rates, personal credit monitoring firm, Experian gave tips on what fast options remain available.

In a series of releases, the NHC, NLIHC and NAR responded to Trump’s recent executive order on eviction moratoriums and rental assistance.