Is now a good time to invest in real estate automation technologies?
HousingWire Magazine: August 2022
6 Steps for Lenders to Reduce Cost Per Loan & Increase Margins with Appraisal Automation
Logan Mohtashami: Will we see a soft landing for housing?

For those of us that live in areas where fracking takes place, a relatively new phenomenon has sprung up in the last few years – earthquakes.

Hydraulic fracturing, or fracking, is the practice of injecting a mixture of water and chemicals into underground shale formations to release previously inaccessible oil and gas reserves that are trapped within the rock.

In many cases, the shale formations are located underneath developed areas, including neighborhoods. But unconventional gas drilling allows the gas wells to be built hundreds or thousands of feet away from the developed land, while still allowing access to the valuable minerals.

Fracking also presents a number of risks for lenders, servicers, investors and other mortgage market participants, as detailed at length in the September 2014 issue of HousingWire Magazine.

One of those risks is an increase in earthquakes, an issue the mortgage industry is well-versed in dealing with, having faced it for many years in California and other areas that are prone to earthquakes.

While a definitive scientific link between fracking and an increase in earthquakes hasn’t been revealed, areas that historically almost never had earthquakes, like Oklahoma and Texas, are now far more likely to experience earthquakes, according to new research from the United States Geological Survey.

The new data, released this week by the USGS, identifies areas of the country that are at an increased risk of “human-induced” earthquakes.

According to the USGS, human-induced earthquakes are triggered by human activities, with wastewater disposal being the primary cause for recent seismic events in many areas in the Central and Eastern portions of the U.S.

Wastewater from oil and gas production operations can be disposed of by injecting it into deep underground wells, below aquifers that provide drinking water, the USGS said.

And the presence of fracking has coincided with an increase in earthquakes in many of those areas.

“The central U.S. has undergone the most dramatic increase in seismicity over the past six years,” the USGS said in its report.

According to the USGS report, from 1973 to 2008, there was an average of 24 earthquakes of magnitude 3.0 and larger per year in the central U.S.

To date, the largest earthquake located near several active injection wells was a magnitude 5.6 in 2011 near Prague, Oklahoma, the USGS report noted.

According to the USGS report, there are roughly 7 million people that live and work in areas in the Central and Eastern U.S. that have the potential for “damaging shaking” from human-induced seismic activity.

And, for the first time, the USGS said it is able to forecast the areas most at risk of human-induced earthquakes.

In fact, the USGS data shows that in some of those areas, the chance of damage from all types of earthquakes is similar to that of natural earthquakes in high-hazard areas of California.

“By including human-induced events, our assessment of earthquake hazards has significantly increased in parts of the U.S.,” said Mark Petersen, chief of the USGS National Seismic Hazard Mapping Project. “This research also shows that much more of the nation faces a significant chance of having damaging earthquakes over the next year, whether natural or human-induced.”

Click the map below to see what areas are most at risk for human-induced earthquakes in the next year. 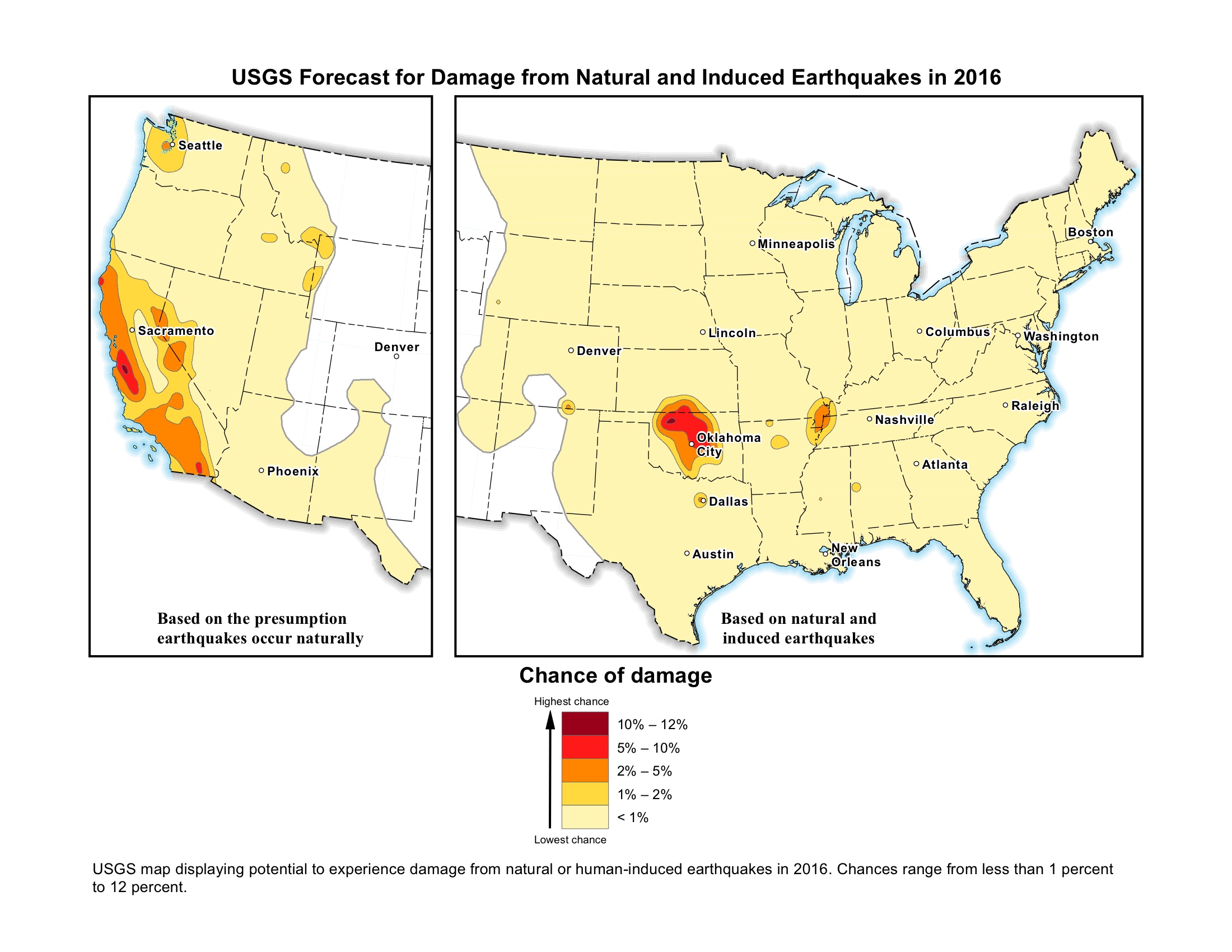 (image courtesy of the USGS)