Luxury home sales in Denver increased 40% in February from February 2015, according to a report by Coldwell Banker Residential Brokerage.

According to Denver Real Estate Watch, there were 88 luxury homes sold in February, a 39.6% increase from the 63 sales in February 2015, according to an analysis of multiple listing service data by Coldwell. Luxury sales for February were down 3.3% from January’s extraordinary 91 closings.

Luxury homes are defined as those sold for more than $1 million, but there were 17 homes sold in February that were more than $2 million — a 70% increase from the 10 sold at that price in February 2015. 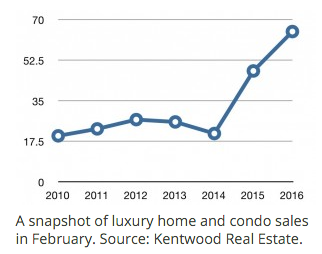 “There are plenty of buyers out there ready to purchase, and now we’re starting to see a few more listings coming on to meet that demand,” Mygatt continued.

Per Denver Real Estate Watch, sellers received an average of 97% of their asking price, up from 95% a year ago and the same as the previous month.

Denver, Boulder, Castle Rock, Cherry Hills Village and Littleton were the cities that boasted the most in selling million-dollar homes in February.

Although homebuying in January followed the seasonal trend with fewer homes on the market and slow sales movement, the housing market picked up as it headed into the busy spring season. Denver came in as No. 9 on the hottest top 20 housing for January 2016, according to realtor.com.

In the Veros Real Estate Solutions top 25 markets report, the Denver-Aurora-Broomfield metro was No. 3 in January.