During the episode, Velt highlights which brokerages achieved top rankings in both categories for 2020, and shares what stood out to her the most about the rankings.

Rates jumped to 3.17% last week and Black Knight reported that there are now just 11.1 million “high quality” refi candidates. The smallest number of potential refi candidates in a year.

HOPE NOW is an alliance of mortgage servicers, investors, mortgage insurers and nonprofit counselors. HOPE NOW did not release data on long-term re-delinquency rates. In other words, there is no way to currently determine how effective these solutions are in the long term.

Further, in total, these mortgage solutions include loan modifications, short sales, deeds in lieu and other workout plans.

Reported by the U.S. Department of Treasury, out of the 420,000 permanent loan modifications, 302,000 were proprietary and 117,267 were completed under the Home Affordable Modification Program.

"Delinquency and foreclosure data continues to decrease and approach pre-crisis norms. Although permanent loan modifications were at a peak of 160,000 in June 2010, they remain around 30,000 a month and nearly 420,000 homeowners received a modification in 2015,” he added.

“Just six years ago, we were at the apex of the foreclosure crisis with over 4.1 million homeowners in serious delinquency and today, we are at 1.6 million,” added Selk.

Here are some more stats: 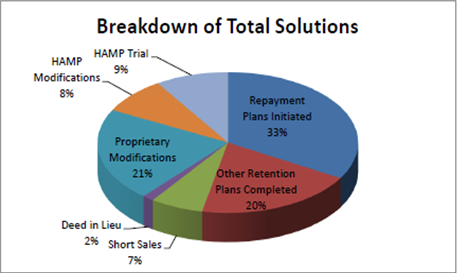 Like others, resi brokerage & lender William Raveis is happy to buy your home. But its new program doesn’t mean it’s an iBuyer.

Mortgage servicers take steps to support borrowers amid COVID-19
From forbearance to post-forbearance: How to make the process effective
How one lender is tackling demand for jumbo loans in 2021
Should lenders look to non-QM when the refi boom slows?