The latest new home sales report presents a more positive forecast on the future of today’s current inventory crisis after several industry reports give strong concerns over the market’s daunting lack of inventory.

In Trulia Chief Economist Ralph McLaughlin’s analysis of Wednesday’s new home sales report, he explained that the share of new home sales not started, in other words homes purchased off a plan, hovers near a 10-year high. 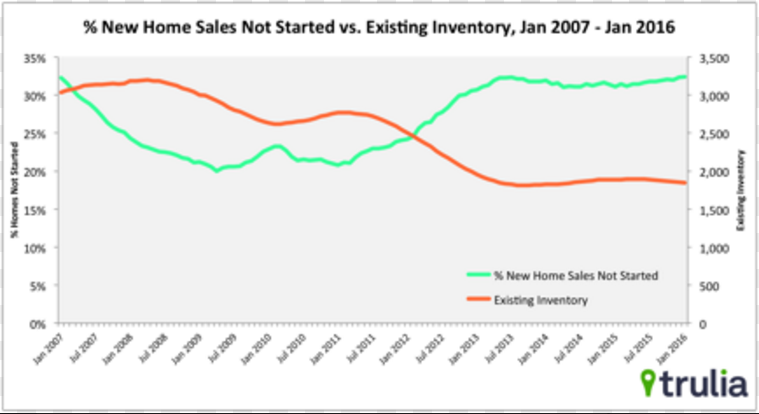 The housing market can’t seem to get past the inventory shortage that keeps penetrating into all crevasses of the industry. And while this won’t change this year, there may be hope for next year as builders start to play catch-up, a Fitch Ratings report recently said.

The National Association of Realtors’ latest report posted that in January, total existing-home sales, which are completed transactions that include single-family homes, townhomes, condominiums and co-ops, slightly increased 0.4% to a seasonally adjusted annual rate of 5.47 million, up from a downwardly revised 5.45 million in December.

The latest S&P/Case-Shiller report echoed similar inventory concerns, with Zillow Chief Economist Svenja Gudell commenting on it saying, “There are a lot of economic forces at work behind the scenes that will have a big impact on housing as we enter the busy home-shopping season. Low inventory is a factor in almost every market, so buyers should be prepared for a limited selection in the months to come.”

However, McLaughlin cautioned, “All new home sales numbers from the U.S. Census are extremely volatile: the margin of error is wide and often includes zero, which means we can't be certain whether the month-over-month or year-over-year changes actually increased, decreased, or stayed flat.”

McLaughlin instead pointed to the 12-year rolling total, which is up 11.9% year-over-year but down 0.4% month-over-month.

“This reflects a slow but steady increase in demand from homebuyers as well as increasing confidence of homebuilders. It also a positive sign for the U.S. economy headed into 2016, as new home sales leads to new construction and consumer demand for housing-related goods and services,” McLaughlin said. “Despite the positive news, new home sales remain about 24% below the 50-year average.” 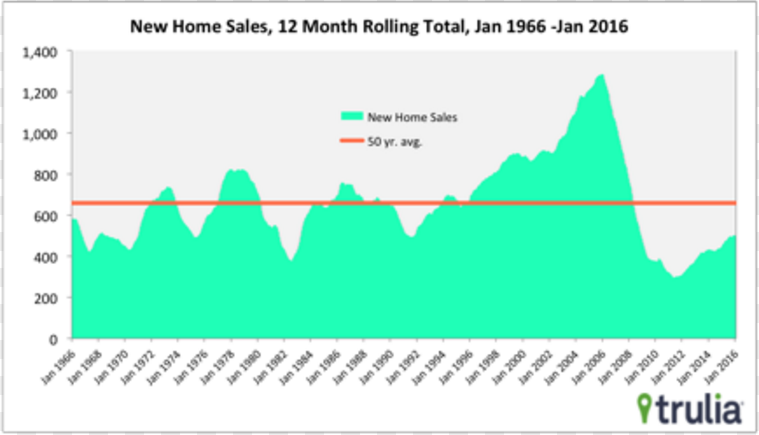