Although home prices continued to increase, boding well for the economy, it’s still not strong enough to offset some of the trouble spots.

The 10-City Composite escalated 5.3% in the year to November compared to 5.0% previously, while the 20-City Composite’s year-over-year growth hit 5.8% versus 5.5% reported in October.

On a monthly basis and after seasonal adjustment, the national Index, along with the 10-City and 20-City Composites, all increased 0.9% month-over-month in November. 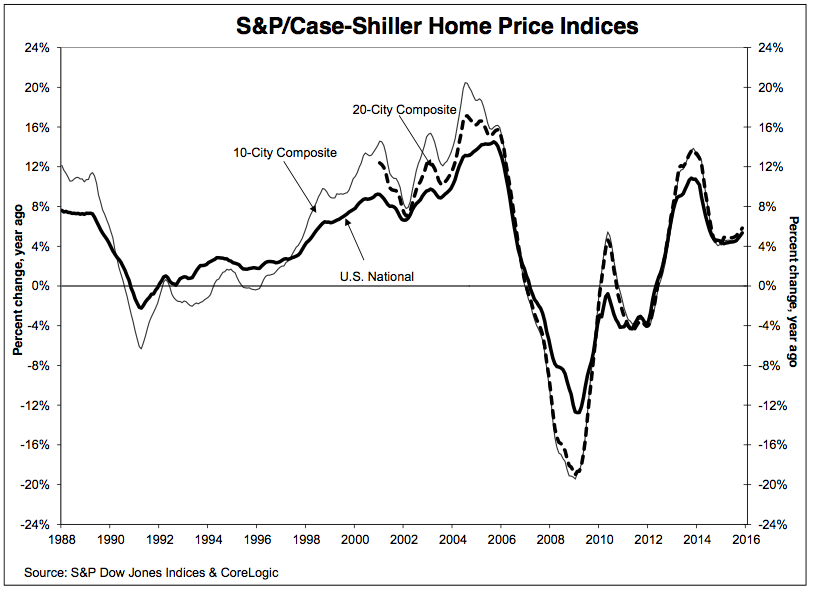 “Home prices extended their gains, supported by continued low mortgage rates, tight supplies and an improving labor market,” said David Blitzer, managing director and chairman of the index committee at S&P Dow Jones Indices. “Sales of existing homes were up 6.5% in 2015 vs. 2014, and the number of homes on the market averaged about a 4.8 months’ supply during the year; both numbers suggest a seller’s market.”

Blitzer added that while a consumer portion of the economy is doing well, like housing and automobile sales, other parts of the economy are not faring as well. “Businesses in the oil and energy sectors are suffering from the 75% drop in oil prices in the last 18 months. Moreover, the strong U.S. dollar is slowing exports. Housing is not large enough to offset all of these weak spots,” he said.

Broken up across the country, Portland, San Francisco and Denver continue to report the highest year over year gains among the 20 cities with another month of double digit annual price increases.

“Home prices rose in November, pushed by stubbornly-low home inventory as sellers still wait on the sidelines. While owners enjoy seeing the value of their investment grow, some markets are running into an affordability problem – especially with areas in the west seeing double-digit yearly price growth,” said Quicken Loans vice president Bill Banfield.

Detroit posted the largest annual increase this month, with a 6.3% year-over-year price, up from 5.1%. 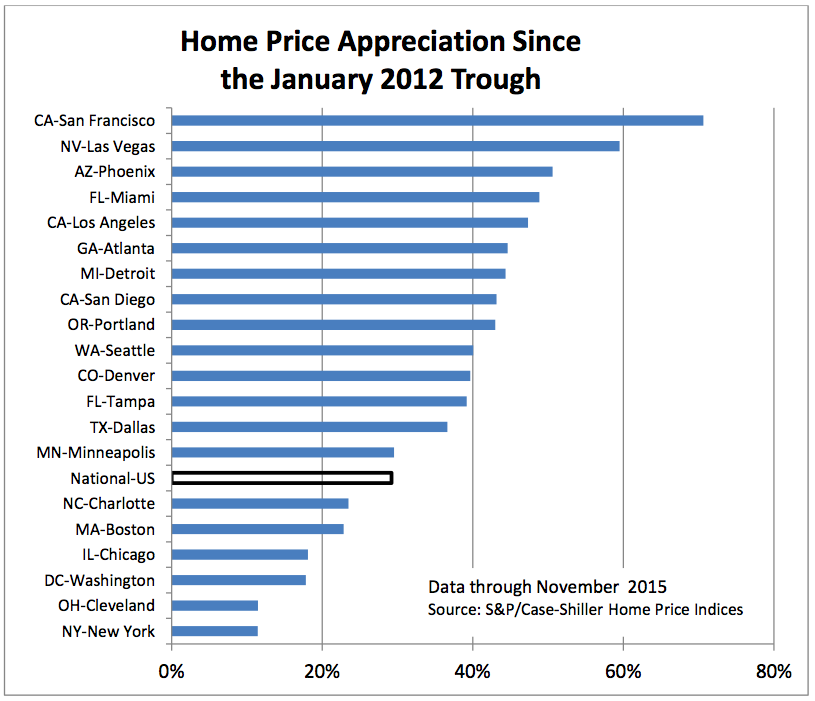 “As the final numbers from 2015 are tallied and we look ahead at this year, the housing market in 2016 is poised to be as close to ‘normal’ as we’ve seen for quite some time,” said Zillow Chief Economist Svenja Gudell. “Home value growth has largely stabilized at a sustainable level and the runaway appreciation that marked the last few years has passed, even as some markets remain much hotter than others.”