Now that over two months have passed since the TILA-RESPA Integrated Disclose rule went into effect, the initial impact is starting to show in the closing data, according to the latest Origination Insight Report by Ellie Mae.

In the last report, Jonathan Corr, president and CEO of Ellie Mae, said “It is still too early to see if there will be impacts stemming from the Know Before You Owe changes that went into effect just last month.”

A month later and in the new report Corr said, “We are beginning to see the anticipated impacts of the Know Before You Owe changes that went into effect in October.”

The average time to close a loan increased by 3 days to 49 total days in November, the longest time to close since February of 2013. 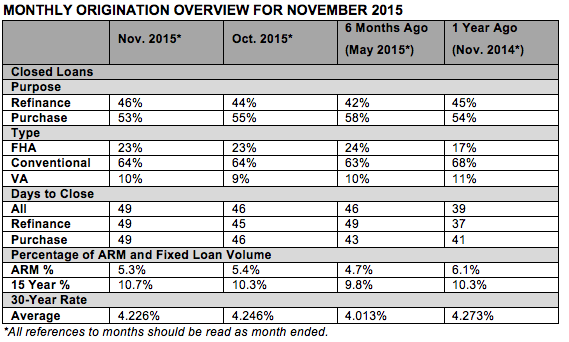 “The time to close loans has crept up to 49 days, a 3-day increase over October, while the closing rate on purchased loans increased to 72 percent. Additionally, we’ve seen the percentage of refinances increase to 46% of all closed loans, most likely driven by a recent dip in rates over the last three months since the 2015 high point in August,” said Corr.

This isn’t the first report to say that TRID is impacting the industry, though not everyone is saying TRID is completely bad.

In a recent speech, CFPB Director Richard Cordray compared the October implementation of the CFPB’s new TRID rules to Y2K, telling the Consumer Federation of America Financial Services Conference that the housing industry’s concerns about TRID are looking like they were much ado about nothing.

On the other hand, HousingWire conducted a series of interviews with community lenders about how TRID is impacting their business, and said that Cordray’s comparison of TRID to Y2K isn’t just off-base, it’s wildly disappointing.