Appraisal volume recovered some of the previous week’s drastic decline and increased 35.7%, the latest data from a la mode, an appraisal forms software company that tracks appraisal volume throughout the country, said.

Last week, appraisal volume plummeted 29.2%. However, the apparently dramatic drop was not something to be concerned about. In fact, it was less than the average drop of 30.6% for the Thanksgiving Day week. 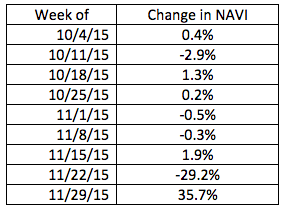 “The National Appraisal Volume Index bounced back for the week of Nov. 29 from the holiday week with a 35.7% increase.  Although substantial, it fell a bit short of brining the volume up to the levels seen in the week before Thanksgiving,” said Kevin Golden, director of analytics.

Golden added, “Comments by Fed Chairwoman, Janet Yellen, that the economy is ripe for an interest rate hike may be cooling volume as fears of rising rates linger, as well as the continued seasonal slowing as we entered December.”

Last week, Yellen said the current outlook and the flow of data since the central bank's last meeting in October are "consistent" with the rate hike criteria spelled out by U.S. policymakers.

Appraisal volume is an indicator of market strength and has some advantages over mortgage applications. Fallout is less for appraisals since they are ordered later in the mortgage process after credit worthiness has been approved and there are few multiple-orders.

a la mode captures 50% of the appraiser market – more than 6 million appraisals per year since the fourth quarter of 2006.