The delinquency rate for mortgage loans on one-to-four-unit residential properties maintained its downward trend and dropped to 4.99% of all loans outstanding at the end of the third quarter of 2015, the latest Mortgage Bankers Association’s National Delinquency Survey stated.

This marks the lowest level since the first quarter of 2007.

The delinquency rate includes loans that are at least one payment past due but does not include loans in the process of foreclosure.

The chart below shows the changes in mortgage foreclosures and the delinquency rate.

In the first quarter, the delinquency rate for mortgage loans on one-to-four-unit residential properties decreased to a seasonally adjusted rate of 5.54% of all loans outstanding at the end of the first quarter of 2015. 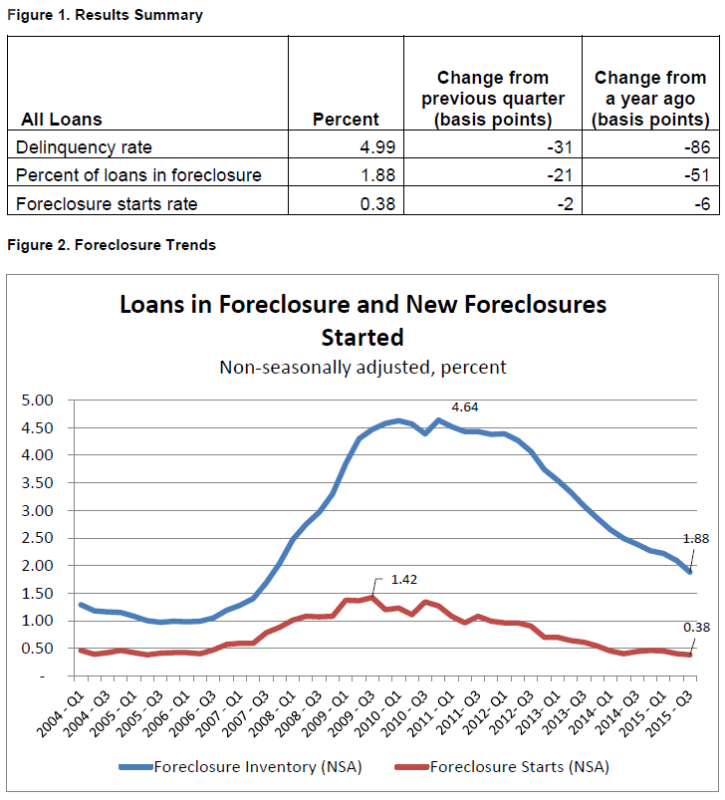 "Overall delinquency rates and the percentage of loans in foreclosure continued to fall in the third quarter and are at their lowest levels since the first quarter of 2007.  The serious delinquency rate – measured by those loans that are 90 days or more delinquent or in the process of foreclosure – declined for nearly every state in the nation,” said Marina Walsh, MBA’s vice president of Industry Analysis.

“The factors influencing this outcome include a nationwide housing market recovery, resolution of long-standing troubled loans that eventually proceeded through the foreclosure process, and an improving employment outlook that provided distressed borrowers viable alternatives to foreclosure,” Walsh said.

Other noteworthy facts include that the percentage of loans on which foreclosure actions were started during the third quarter was 0.38%, down two basis points from the previous quarter, and down six basis points from one year ago. The foreclosure starts rate is at the lowest level since the second quarter of 2005.