The latest chart in this Mortgage Bankers Association’s series shows one area that was deeply impacted by the financial recession and the effects that the housing market is still dealing with.

Spoiler alert: The chart echoes what most of the industry already knows: Millennials are not buying.

But, as it turns out, they aren't the only ones.

And as you can see below, for the last 10 years, most under-50 year old Whites are classified in negative territory: 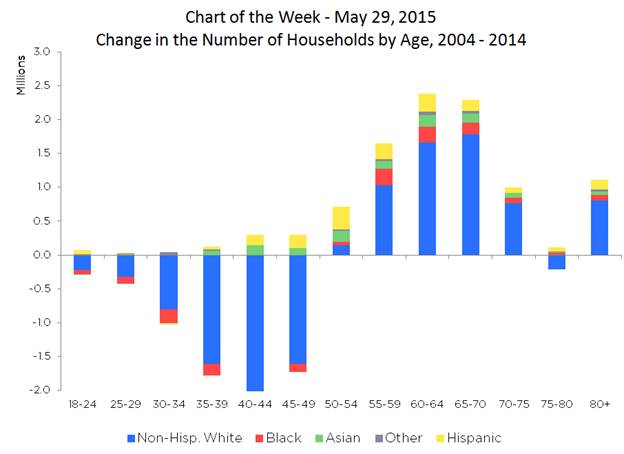 The MBA chart cuts straight to the heart of household demand, which is falling desire to participate in household formation.

The chart shows that household formation was negative for households with at least one adult under the age of 50 between 2004 and 2014.

According to the MBA’s report:

Some of the loss in household formation was due to job loss and financial woes – individuals “doubled up” and young people moved back home to save money resulting in fewer households. There was also a net loss of population between the ages of 35 and 49 after the Baby Boomers advanced into older age during this period. The simultaneity of the ill effects of the recession on younger people and the dip in the population of prime home-owning age households has contributed to single-family housing’s slow recovery.

But it’s not all bad news. The MBA expects household formation and housing demand to strengthen this year thanks to recent reports showing increases in formation.