Americans’ views toward housing have not varied much over the past year, and they are still positive on homeownership as a good financial investment.

According the Federal Reserve Bank of New York’s 2015 housing survey, U.S. households, on average, expect home-price growth to continue at a 4.4% pace for the next year, comparable to the average year-ahead expectation reported in last year’s survey. 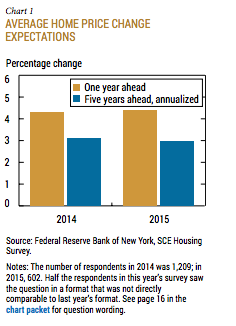 Last year’s survey was the first in the series, with this year’s survey getting administered to 1,205 U.S. heads of household in February 2015.

Survey respondents were asked for the current value of a typical home in their zip code, and what they expected the value of that home to be in one year and in five years.

Heads of households were also asked the ultimate question: Is housing a good investment? 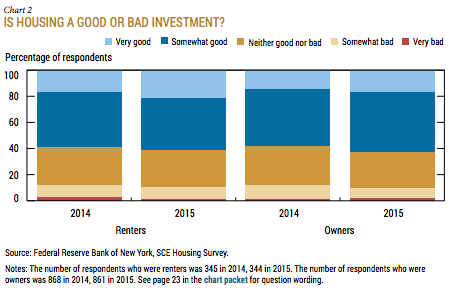 The survey found that more than 60% of both renters and owners think that buying property in their zip code is a (very or somewhat) good investment, while only about 10% think it is a bad investment.

When it comes to renters answering this question, there was little difference in how they answered compared to 2014.

Jobless claims fall to 1.9 million, the lowest since March