Excessive levels of student debt repayments are not acting as a roadblock to housing for first-time homeowners, at least not yet.

According to a new report on student debt and housing from Capital Economics, while many believe that America’s outrageously growing amount of student debt is holding millennials back from buying a home, calculations suggest that they are wrong.

According to the National Association of Realtors, the average first-time buyer (FTB) is 31 years old. Assuming that they graduated in 2005 or 2006, when the average student loan debt was around $16,000, and that they found a job within a year or so of leaving college, they are likely to have already paid off most of the debt under the standard terms of a 10-year federal student loan.

And even in the case that they have no progress in paying down their loans, at current interest rates, a 30-year mortgage with a 3.5% down-payment (the minimum permitted by the FHA) on a home worth $178,000 (the average price for an FTB home) generates monthly repayments of around $940 including fees. Add in a $16,000 student loan or, conservatively, two loans for a couple, and that rises to $1,300 per month.

So here’s the math.

Since the maximum permitted debt-to-income ratio for FHA loans is 43%, this implies that the average FTB household needs a gross income of at least $36,280 to qualify for an FHA mortgage on an average priced home.

And according to the Census Bureau’s Current Population Survey, the median income for households headed by someone aged 30 to 34 is $58,500, which is well above the calculated threshold suggesting that student debt repayments should not be a major constraint on FTB demand.

This is doesn’t mean that student debt won’t eventually be an issue. 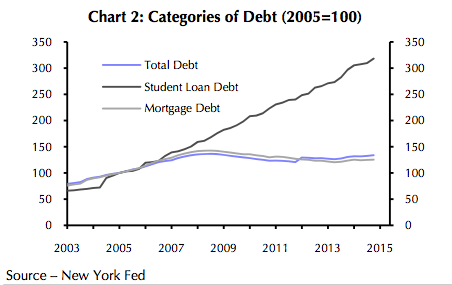 But for now, other things are hampering first-time buyers ability to afford a home.

According to the report, the share of sales to first-time buyers has been fairly static at a relatively low level of 30%, below the long- run average of 40%.

Mike Cagney, CEO of SoFi, which does student loan refinances and mortgages, presented a new idea.

“In theory, a SoFi borrower should be an ideal first time homebuyer. 32 years old, graduate degree education with individual income over 150K and household income over 200K, FICO scores north of 760.  But the number one complaint we heard from members was the lack of credit offered to buy a home,” Cagney said. “For non-conforming loans, the issue wasn't their student loans, per se, but the 30% down lenders were asking for from first time buyers – and the massive hassle that went with getting a mortgage.  Even when they got credit, they were frustrated constantly losing out to all-cash bids in markets like SF, LA, NY, Boston, DC, etc.”

However, Cagney did cite an issue with the report. “One of the flaws in this study is that the population who is most likely in a position to buy a home (e.g., a SoFi type borrower) is also more likely to have debt.  While the study says 31 year olds should be debt free, our average borrower is 32 and has over 70K of debt.  Once they have visibility on how they are paying that debt off, they are ready to consider buying a home.”

The CFPB report shows that while on average servicers improved their call metrics, there are several significant outliers.