The dramatic fall in the company’s stock price was expected though, as the company announced last week that it plans a complete liquidation and dissolution and will issue a distribution of approximately $1.2 billion, or $16.613 per share, which was to be paid on April 27, 2015.

Upon the consummation of the proposed merger, holders of ordinary shares of the HLSS at the time of the merger will receive an aggregate of approximately $50 million or $0.704059 per share, and all shares of HLSS will automatically be canceled, hence the precipitous drop in HLSS’ stock.

Even though the stock drop was expected, it still looks remarkable when viewed on a one-year record of HLSS’ stock, as shown in the image below; click to enlarge (image courtesy of Google Finance). 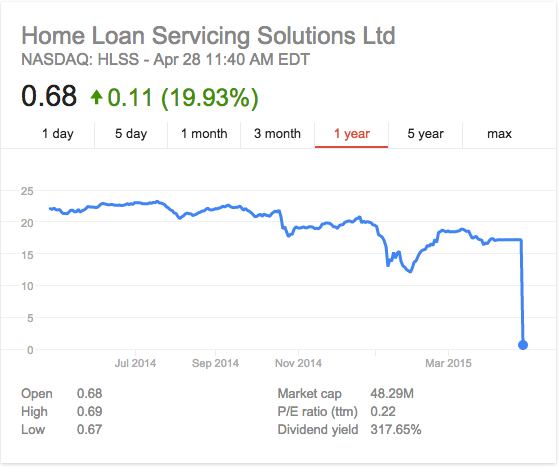 After hovering somewhere between approximately $23 and $12 for the last year, the company’s stock rose in the wake of the New Residential acquisition, before steeply falling when trading opened Tuesday morning.

According to HLSS, NASDAQ stated that its listing qualifications staff now believes that HLSS is a “public shell” as a result of New Residential’s acquisition of the company’s assets.

“Despite our efforts to pursue the merger as initially planned, certain circumstances prompted HLSS to pursue an asset purchase agreement with New Residential,” John Van Vlack, chief executive officer of HLSS said when the New Residential acquisition was announced.

“We believe this alternative transaction structure made the most sense for us as it allowed HLSS to file its financial results without a going concern qualification and provide the greatest certainty on funding new servicing advances,” Van Vlack added. “This transaction will also enable our shareholders to maximize value for their shares.”