As the weather warms up so should the housing market, according to the January report from Freddie Mac. A harsh winter put a damper on housing, with the updated Multi-Indicator Market Index falling to 74.6, indicating a weak housing market overall and showing a slight decline (-0.20%) from December to January and 3-month decline of (-0.37%).

Furthermore, the drop in the national MiMi value in January is broad-based, and not concentrated in a handful of state of metro markets.

"Housing markets weakened slightly this month, which is no surprise considering the harsh winter and slowdown in economic activity at the outset of 2015,” said Freddie Mac Deputy Chief Economist Len Kiefer.

“The improving employment and attractive mortgage rates should help to support increased purchase applications, particularly as the weather warms up and we head into the spring homebuying season,” Kiefer added.

He explained that while single-family purchase applications dipped a bit across the board from December to January, they are still up nearly 3% from last year. 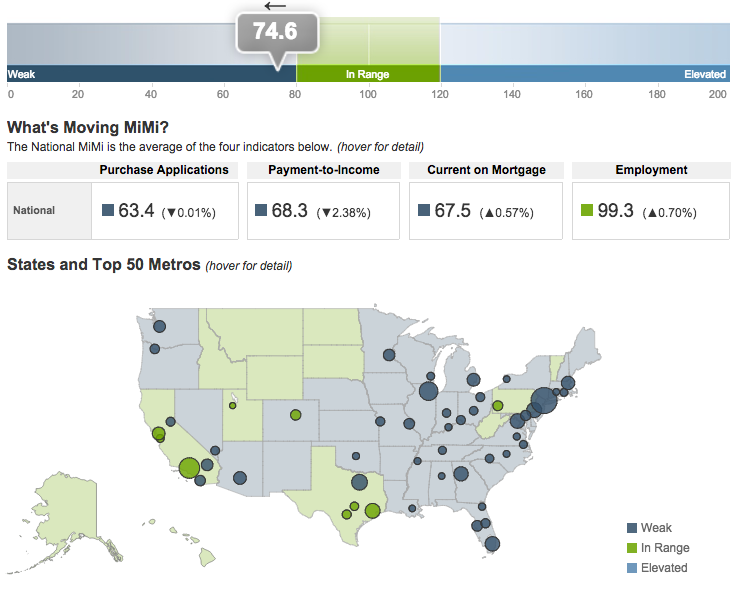 Tampa squeezed its way into the top five, with a weak but improving housing market.  The metro is largely improving due to the 8.36% increase in the current on mortgage indicator over the past three months.

San Jose’s market is in range and improving. The metro is improving largely due to the 3.86% increase in the purchase application indicator over the past three months.

Denver posted an in range and improving housing market, with majority of the improvement coming from a 5.495 increase in the purchase application indicator over the past three months.

Although Sacramento’s housing market is weak and improving, it still made it to the second slot for most improved metro markets. Most of the improvement is due to the 4.07% increase in the employment indicator over the past three months.

Coming in as the most improved metro area, Portland’s housing market is weak and improving. The metro can attribute most of its improvement to the 4.67% increase in the purchase application indicator over the past three months.