Fannie Mae and Freddie Mac posted incredible profit in 2013, bringing in $84 billion and $49 billion, respectively. But in a drastic downturn, both government-sponsored enterprises' net earnings fell by over 80% in 2014, falling to $14 billion and $8 billion, respectively, according to Urban Institute Senior Fellow Jim Parrott’s new report on “What to make of the dramatic fall in GSE profits.”

Just as the industry was praising the strong profits that the GSEs were bringing in, the conversation started to shift to whether Freddie would require another draw on Treasury, Parrott explained.

HousingWire published another piece Monday exploring the likelihood of a Treasury draw for Freddie, including three reasons why that wouldn't be likely.

To understand the significant drop in profit, Parrott explained the sources behind the GSEs’ profits.

“About half the profits of each institution came from reclaiming tax assets that were written down during the crisis: Fannie reclaimed $45 billion and Freddie $23 billion. Between a quarter and a third of the profits came from earnings from their portfolios: Fannie earned $19 billion and Freddie earned $16 billion. And a significant sum came from legal settlements, though precisely how much is difficult to decipher, as the settlements are dispersed among several larger revenue streams,” said Parrott.

And this lower profit is likely here to stay.

“The only major revenue source not being wound down is what the GSEs generate from their core guarantee business, in which they collect a fee in exchange for guaranteeing the default risk of loans for investors,” Parrott added.

Parrott explained that the steady decline of several large but ephemeral sources of revenue will force the GSEs to rely increasingly on their guarantee business for their profits. 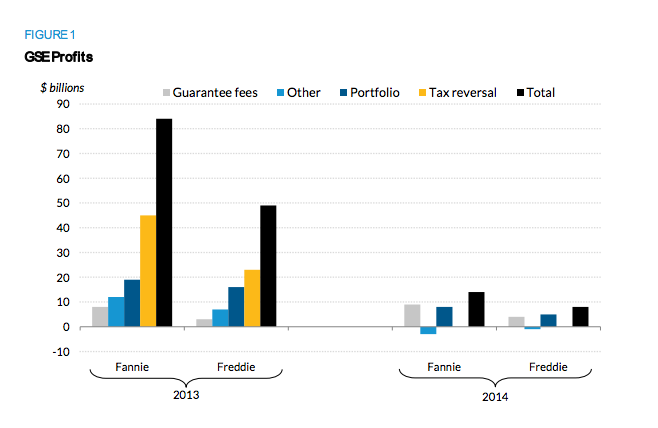