The State of New York has filed suit against Evans Bank (EVBN), claiming that the bank “systematically denied its mortgages and services to African-Americans in the Buffalo metro area,” in a practice commonly known as “redlining.”

According to the suit filed on behalf of the People of the State of New York by New York Attorney General Eric Schneiderman, Evans Bank allegedly created a map of its “lending area,” which included most of the city of Buffalo, but excluded the predominately African-American neighborhoods on Buffalo’s Eastside.

Per the U.S. Census data, all of the suburbs surrounding Buffalo are majority White, while more than 70% of the African-American population is located within the city of Buffalo itself.

According to the suit, Evans Bank excluded the minority neighborhoods from its “trade area,” the area in which it offered its services, and refused to sell its mortgage loans in the predominately minority areas.

The lawsuit alleges that Evans Bank created a map of its “trade area” and made it available to the public.

The picture below is from the lawsuit filing and shows Evans Bank’s trade area highlighted in red, with the predominately African-American neighborhoods excluded from the service area. Click the image to enlarge it. 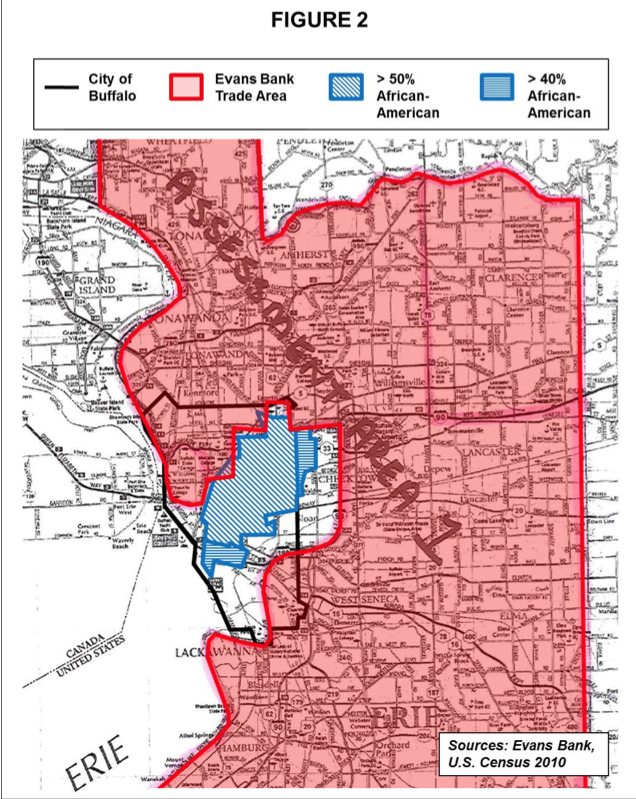 The lawsuit alleges that Evans “automatically disqualifies borrowers with properties outside of its Trade Area from eligibility for certain mortgage products and services, regardless of the creditworthiness of such borrowers.”

The lawsuit also alleges that Evans “further avoided” the minority neighborhoods by refusing to locate branch offices or other facilities within the Eastside neighborhoods, “instead locating them so as to form an exclusionary ring around those neighborhoods.”

The map below, also taken from the lawsuit filing, shows the location of Evans Bank’s branches and ATM’s, with no locations inside the minority neighborhoods. 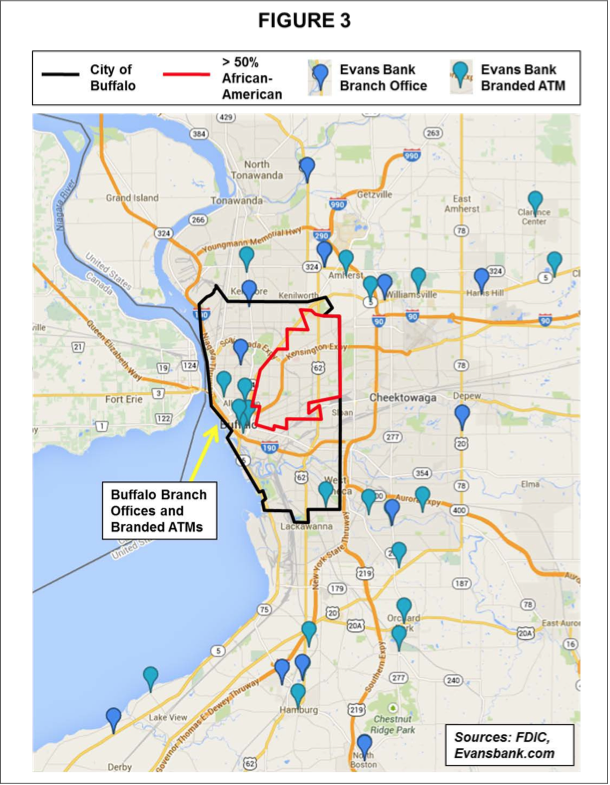 “The lawsuit alleges that a statistical analysis shows the racially discriminatory effects of the bank’s practices, demonstrating that Evans failed to draw mortgage applications from and make mortgage loans to African-American borrowers and Eastside residents at the rates expected based on the performance of comparable banks operating in the same area during the same period as Evans,” Schneiderman’s office said.

The lawsuit states that, as an example of Evans Bank’s discriminatory lending practices, the bank received 1,114 residential mortgage applications in the Buffalo metro area from 2009 to 2012, only four of which were reported as from African-American applicants. The suit also states that of those 1,114 residential mortgage applications, only eight came from the Eastside neighborhoods, only one of which was reported as from an African-American applicant.

“Redlining is illegal, discriminatory, and must be made a thing of the past, once and for all,” Schneiderman said. “It is crucial that all New Yorkers, regardless of the color of their skin or the racial composition of their neighborhood, be afforded an equal opportunity to obtain credit.

“This is especially true as families continue to recover from the mortgage crisis–and as we work to achieve a fairer, and more just, New York State. My office will continue to do all it can to restore the health of our economy and ensure that all New Yorkers are treated equally, regardless of race or ethnicity.”

Click here to read a copy of the lawsuit.