The combined entities would provide funding solutions for more than 1,500 member financial institutions in 13 states when some institutions only cover 2 states. In addition, they would hold about $119 billion in assets.

"The members of FHLB Des Moines and FHLB Seattle would become members of a combined institution that, in our view, would be in a stronger financial position than if both Banks were to remain stand-alone entities,” said Michael Wilson, FHLB Seattle president and CEO.

“We also believe that the combined Bank would be better able to maintain an appropriate mission focus and strong financial condition in the long run through the challenges of different economic cycles and regional economic conditions," he added.

Here is map from SNL that helps visually put into perspective just hold large the new entity would be. (Click for larger image). 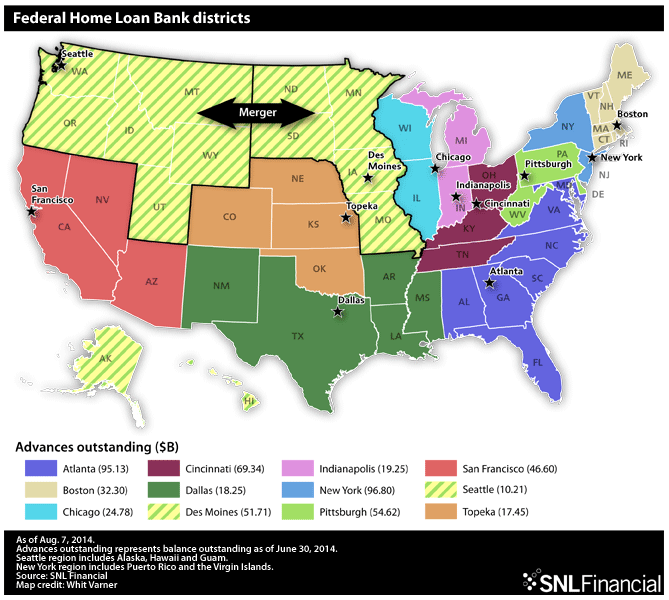 And while this merger could be to the benefit of both entities, it won’t be an easy transition.

"They're going to have to combine the enterprises, and they'll face a challenge in picking the right people, as well as to have a really strong integration plan," said Chip MacDonald, partner at law firm Jones Day, and specialist in mergers and acquistions. "There are a lot of details in a merger of this size; they are going to have to do a lot both on the front and back end of their origination processes."

So far, the article noted that early indications from Washington D.C. suggest the merger does not face significant opposition.

Between the two banks, FHLB of Des Moines is significantly larger than Seattle, and their respective portfolios continue to move further apart. 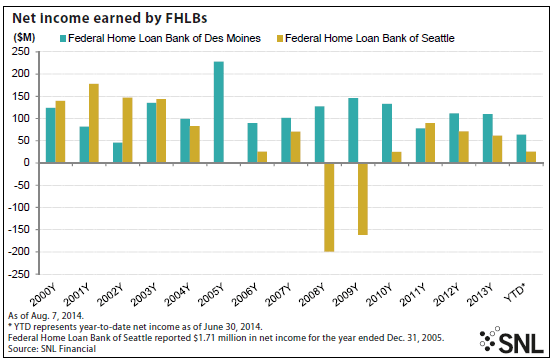