In what is becoming a weekly experience lately, another REO-to-rental securitization is coming to the market.

American Residential Properties (ARPI) is set to bring a $342.67 million securitization to market. The offering is backed by a single loan secured by the first priority of mortgages on 2,880 income-producing properties in eight states.

The offering, American Residential Properties 2014-SFR1, will mark the third straight week that a REO-to-rental securitization has hit the market, demonstrating the growing popularity of the asset class.

And last week, Invitation Homes is brought its third REO-to-rental securitization to market. The offering, Invitation Homes 2014-SFR2, was collateralized by a single $720 million loan secured by the mortgages of 3,750 single-family rental properties.

Morningstar has weighed on the American Residential offering and awarded $184.89 million in AAA ratings to the securitization’s largest tranche.

Click the image below to see a full breakdown of Morningstar's rating of the deal. 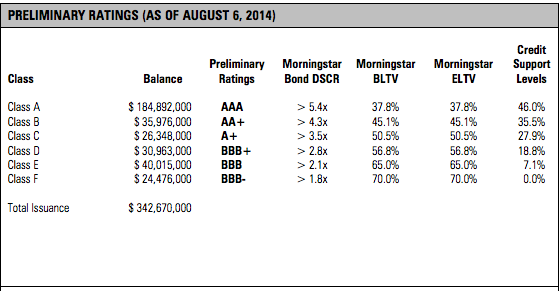 According to Morningstar’s report, 80.4% of the portfolio is located in three states including Texas (36.9%), Arizona (29.1%), and North Carolina (14.4%). The average cost basis per property post-rehabilitation is $156,397. The average age of the properties is approximately 12 years and the majority of the properties have three or more bedrooms (97.5%).

Of note in Morningstar’s presale report is the vacancy rate of the underlying properties, which stands at 4.06% as of the cutoff date. In many of the previous SFR securitizations, the properties were 100% occupied on the respective cutoff dates.

The vacancy rate of the REO-to-rentals’ properties has become a larger discussion point in the last few weeks, with fluctuations being reported in several other SFR securitizations.

On Tuesday, a report from Morningstar showed that the vacancy rate for the single-family rental homes in Colony American Homes’ $513.6 million securitization is rising and it’s rising quickly.

In the last two months, the month-end vacancy rate has risen nearly 77%, from 3.9% in April to 6.9% in June. There are 3,396 single-family rental properties that support Colony American Homes’ first securitization, which launched in March.

That means vacancies jumped from less than 4% to around nearly 7%.

Considering the nature of renters, the level of volatility is to be expected but it is still a potential cause for concern, according to Morningstar.

In its methodology for rating ARP 2014-SFR1’s classes, Morningstar factored in an expected vacancy rate of 12.15%.

Morningstar reports that of the 116 vacant properties, 114 have come off a previous lease and “are proven rent worthy.”

But the properties that make up the ARP offering are much younger than the previous offerings, with an average year built of 2002. According to Morningstar’s report, 64.3% of the properties were built between 2001 and 2010.

As with the other SFR offerings, Morningstar cautions on the limited history of the asset class as a potential concern for the bonds’ performance.