The growth of rental demand as homeownership rates hit historic, near 40-year lows may in part be because of Millennials who want to stay mobile, but it’s also driven by would-be homebuyers who are getting shut out by tight mortgage-lending standards.

"If you can't get into a single-family house and you can't get a mortgage, well, you don't need a mortgage to get an apartment," said Stephanie Karol, an economist at IHS. 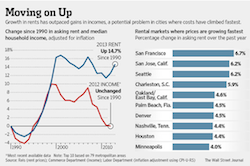 As Tyler at ZeroHedge puts it, there is one big beneficiary of all this.

And since the demand for rental properties will only go up as even parent basements are getting full, it means the already record high rent prices will duly follow, taking even bigger chunks out of US disposable income, and thus, that part of the US economy, some 70% of it, which depends on consumer spending. The beneficiary? The personal bank accounts of owners of rental properties… such as BlackStone – America's largest landlord.

Sure enough, as WSJ confirms, "apartment landlords continued to push through hefty rent hikes in the second quarter, squeezing U.S. households that already are struggling financially after four years of steady increases."

The NAR existing home sales report released today blew out all estimates with 6,540,000 in existing home sales. This epic headline punctured any bubbles the 2020 bubble boys had left in their arsenal. But before we get too excited, keep in mind we are still down 0.2% year to date compared to 2019 levels. Still, this seems like a booming housing market, right?