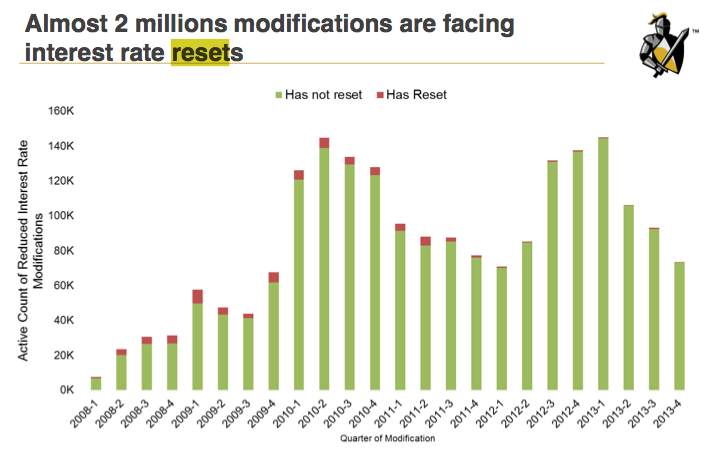 Further supporting this, adjustable rate mortgages with notes below 6% were prepaying at significantly higher speeds than their fixed-rate mortgage counterparts, suggesting that concerns about rising interest rates persist among borrowers.

“We have seen a continual reduction in the number of underwater borrowers at the national level for some time now, but modified loans show a different picture,” said Kostya Gradushy, Black Knight’s manager of loan data and customer analytics.

The national negative equity rate sits at 9.4% of active mortgages. On the other side, the share of underwater modified loans facing interest rate resets is over 40%.

Meanwhile, another 18% of modified borrowers have 9% equity or less in their homes, causing some concern, Gradushy explained.

More than one of every 10 borrowers is in a ‘near negative equity’ position, meaning the borrower has less than 10% equity in his or her home.

“If you do not have about 10% equity in your home, you don’t make any money if you sell the house because closing costs are about 8%,” Jim Gaines, research economist with the Real Estate Center at Texas A&M University, explained.

And this comes amid a wave of lower mortgage rates and the 30-year, fixed-rate mortgage hitting the lowest level in almost nine months.

“Given that the data has shown quite clearly that equity — or the lack thereof — is one of the primary drivers of mortgage defaults, these resets may indeed pose an increased risk in the years ahead,” Gradushy added.

Despite improvement in the overall situation for underwater borrowers, there are still areas in the country where borrowers are hovering at the edge.