“Our mission since 2007 remains the same – to reach out and assist as many homeowners as possible using all of the tools at our disposal. In addition to the progress made via our solution data, HOPE NOW sponsored over 140 face to face events in more than 70 markets nationwide and has been a driving force in bringing together all mortgage stakeholders in the interest of improving the nation’s housing market,” said Eric Selk, executive director of HOPE NOW.

The mortgage industry completed more than 6.52 million total permanent loan modifications for homeowners since 2007. More than 5.31 million of those loans were proprietary programs and 1,223,449 were completed via HAMP.

In the second quarter, approximately 81,000 short sales were recorded, bringing the total to more than 1.32 million since December 2009. When combining both loan modifications and short sales, the total number of permanent, non-foreclosure solutions was more than 7.84 million.

Delinquencies of 60+ days remained unchanged in June at 2.22 million. 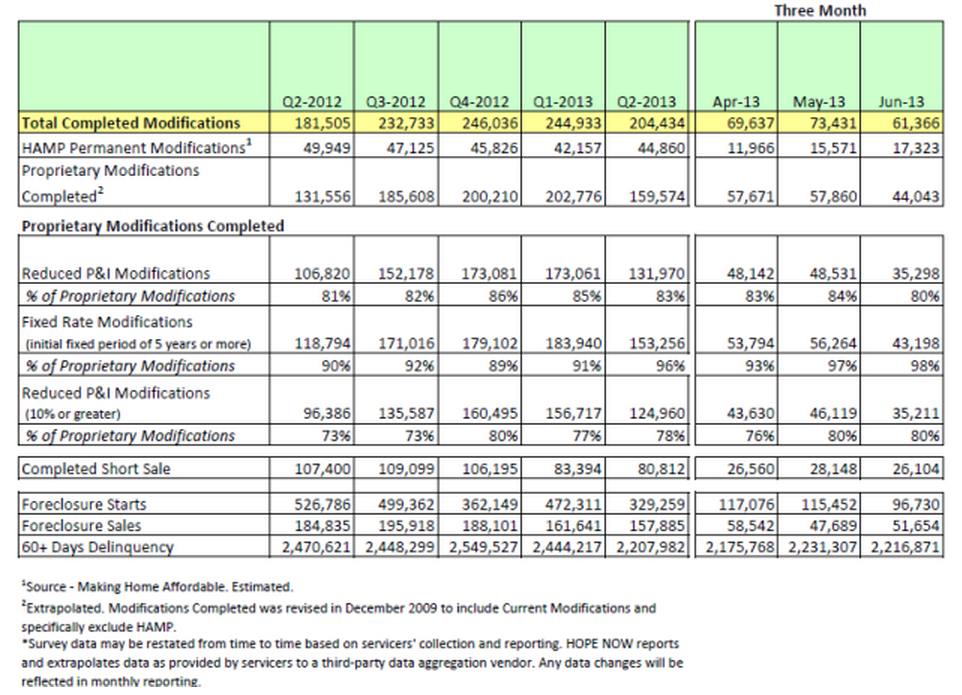 But numbers don’t tell the whole picture. It’s important to know why foreclosures are on the decline.

Daren Blomquist, vice president of RealtyTrac, believes many markets have finally worked their way through the large batch of bad loans originated during the housing bubble years.

“On top of this, as home prices have now bottomed out in most markets, that is helping to lift all boats and allow some homeowners to avoid foreclosure through refinancing or even the sale of their home,” said Blomquist.

“Lastly, the persistent foreclosure prevention efforts over the past few years have waged a war of attrition on the foreclosure problem, helping to keep a lid on foreclosure activity,” he added.

Blomquist mentioned the example of California, where the Homeowners Bill of Rights that took effect in January, causing a 60% drop in foreclosure starts in a single month. “The still-unanswered question with regulations like this, however, is are they actually preventing foreclosures in the long-term or are they delaying them to next year or beyond?”

But the decline in foreclosures is a positive sign for the housing market. “Rising prices have helped some people regain equity, giving them an escape hatch to avoid foreclosure, and also giving them hope to keep making payments, rather than just walking away via a strategic default,” Blomquist said.