New home starts on private residences have been up and down over the past few months, but dropped 9.9% from the revised May estimate of 928,000, reaching only 836,000 in June.

However, housing starts year-over-year increased 10.4% from the June 2012 rate of 757,000, according to data from the U.S. Census Bureau and the U.S. Department of Housing and Urban Development.

"Housing starts retrenched sharply in June on a downswing in the volatile multifamily component. And atypically wet weather likely weighed on starts," said analysts at Econoday. 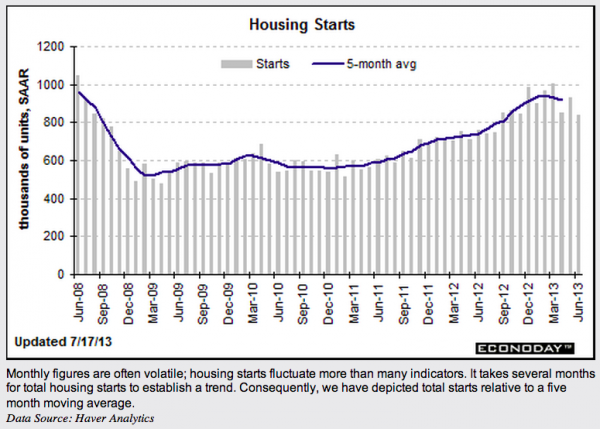 "Today's starts and permits numbers are disappointing but hard to read due to weather issues and the volatility in the multifamily component. The underlying trend likely remains upward. Based on other data, the single-family portion is joining the modest uptrend based on recently favorable numbers for the National Association of Home Builders' housing market index," said Econoday.

The Standard & Poor’s baseline economic forecast expects an increase in total housing starts of about 28% this year, to one million units. In 2014, another 29% increase is anticipated, with starts reaching 1.3 million units.

On Wednesday night the FHFA rolled out a new adverse market refinance fee of 0.5%, which will be assessed for loans sold to Fannie Mae or Freddie Mac after Sept. 1.