When Fairway Independent Mortgage Branch Manager Louise Thaxton started serving a military community in 2005, she got an education about the difficulties military veterans experience when they return home from serving.

“What I discovered as I listened to stories in the military community is that there is a great need for mortgage loan officers to be watchdogs, to stand between the warriors and the wolves, as I like to call it. Most people do not realize there is a military-civilian divide. Once I realized it, I was determined to do whatever I could to bridge that gap,” Thaxton said.

Inspired and eager to fill that need, Thaxton began what became a personal mission to educate the mortgage industry, becoming an advocate for veterans in the process. She started speaking at industry events, volunteered for multiple nonprofits and became an ambassador of the Boot Campaign, a nonprofit which serves wounded warriors as they return to civilian life. While contributing to the military community, Thaxton also quadrupled her mortgage business, going from closing 74 units in 2005 to closing 280 units in 2006 — today averaging 350 to 400 units per year.

How do you quadruple your business in such a short time? Thaxton says, “I found a passion to serve those who serve – and I just wouldn’t give up, let up or shut up about it.”

To support Thaxton’s mission, Steve Jacobson, the CEO of Fairway, proposed she develop a training for Fairway loan officers, which led Thaxton to the creation of the Military Mortgage Specialist division within Fairway. The division trains Fairway loan officers on the culture and core values of military clients, and Thaxton serves as the director.

Fairway employees from around the nation gathered in Dallas at the very first Military Mortgage Specialists Training in April of 2012, and since that time, thousands of Fairway loan officers have received this designation. Just a few weeks later at an annual meeting, Fairway employees were encouraged to donate through payroll deduction to help veterans in need. Within 10 minutes, a quarter of a million dollars was pledged to give back over the next year to disabled veterans.

Through payroll deduction, Fairway employees have the option to contribute through each paycheck. Over the next two years, and because of those donations, Fairway was able to sponsor 24 mortgage-free homes by partnering with two other non-profits.

Shortly after developing the Military Mortgage Specialist designation, Thaxton founded a training for real estate agents which is now the certification of American Warrior Real Estate Professional. In the past seven years, over 30,000 real estate agents in 32 states have received this training.

“All of this was created as a way to give back and bridge the gap between civilians who live in this great country of ours and the warriors who protect them” Thaxton said.

Sean Parnell, a decorated combat Army veteran and New York Times best-selling author of Outlaw Platoon, joined the team in September of 2012, and since then he and Thaxton have traveled to 35-40 locations per year with Thaxton teaching the “American Warrior Real Estate Professional Course” and Parnell serves as the veteran guest speaker.

The mission of these boot camps is to teach the core values of military clients and practical advice on how to bridge the military-civilian divide. These events are hosted by the local Fairway branches and not only provide continuing education to real estate agents who attend, but also include giving back to a local veteran in need at the end of the event.

In 2015, encouraged by Thaxton and Parnell, Fairway founded its own veteran non-profit, the American Warrior Initiative which funds local branch efforts to help disabled veterans. Because this non-profit is underwritten by Fairway, 100% of all donations can go directly to the veterans.

“We find the need and we fill the need,” Thaxton said. “The mission of the American Warrior Initiative is to educate, inspire and encourage Americans to give back. We want to bring awareness to civilians of the challenges facing combat veterans when they return from war. That doesn’t mean just Iraq and Afghanistan veterans, it is veterans of all wars.”

The mandatory attire for these AWI boot camps are R.E.D. Friday t-shirts and combat boots, preferably purchased from the Boot Campaign, which is a non-profit on which Thaxton still serves as an ambassador. R.E.D. stands for “Remember. Everyone. Deployed.” These R.E.D. Friday shirts are made available to all attendees at these events for donations made to the local veteran initiative.

“I won’t stop spreading this message until America is a sea of R.E.D. Friday shirts on Fridays as a sign of support for those who are deployed and harm’s way,” Thaxton said. “It’s the least we can do.” 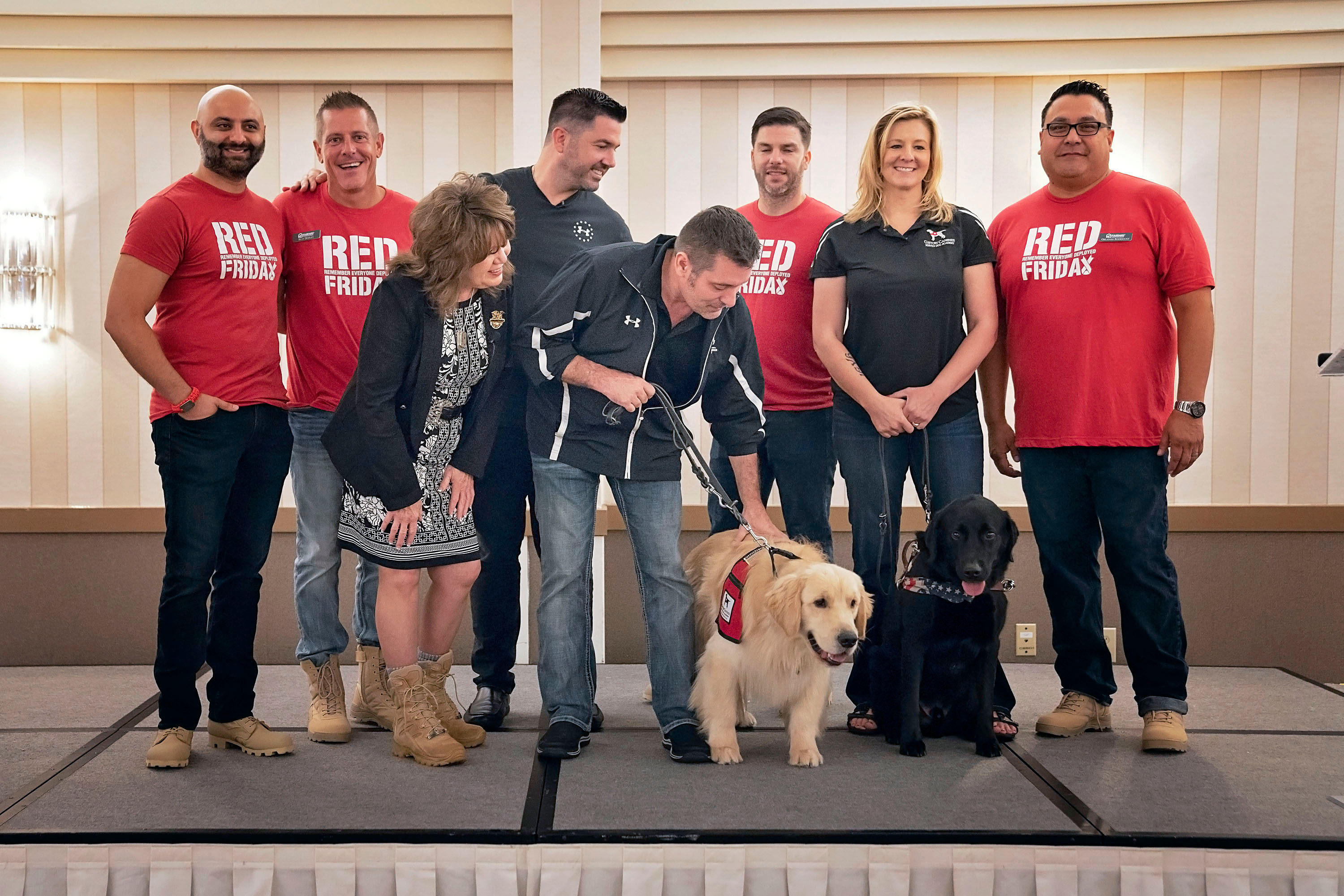 AWI educates civilians on ways they can support the military community. One way is providing service dogs to veterans. Over the past three years, AWI has funded 47 service dogs, but in 2019 they want to do more.

“Service dogs are saving the lives of veterans,” Thaxton said. “Every day, 22 veterans or active duty military take their own life. Now what can we do about that? My call to action has been ‘None of us can do everything. But all of us can do one thing.’ The ‘one thing’ we can do in 2019 is to place a service dog in the hands, hearts and lives of 52 combat vets.”

AWI partners with service dog organizations to help fund a K9 for military veterans on a waitlist. That wait can go on for years and the cost for a service dog can be from $10,000 to $25,000 depending upon the training and the provider.

“None of this would be possible without the generosity of Fairway employees who donate out of their passion and love for this country and the men and women who have fought to protect it. Because they believe, as I do, that we can make a difference for the veterans who have served this country,” Thaxton said.

Over the past several years, Fairway employees have donated $4 million dollars for a wide variety of veteran initiatives, including service dogs, mortgage free homes, business and family grants, vehicles, home repairs and retreats for veterans with post-traumatic stress.

Karen Vaughn join Thaxton and Parnell in traveling the country as AWI Ambassadors, to educate, inspire and serve the military community. Vaughn is the mother of a fallen Navy Seal, Aaron Vaughn, and author of World Changer.

Thaxton sees the support Fairway provided as central to what she has been able to accomplish.

“If Steve Jacobson had never stepped up and said, ‘they served us, now we serve them’, the American Warrior Initiative would not have been created,” Thaxton said.

“We never would have had the platform to spread the message of giving back and bridging the military-civilian divide, and as a result, hundreds of veterans would never have been served and helped.

“We are just blessed to have a CEO that said, ‘just go do it’, and thousands of the Fairway family who have for years given so generously. Because of that, hundreds of veterans’ lives have not only been changed, I believe many have been saved.”