It’s official — after countless industry efforts to accommodate the sweeping changes it requires, the effective date for the TILA-RESPA Integrated Disclosure rule is upon us. But as the industry rolls out new software and processes to comply with the rule, significant problem areas remain unresolved.

One of these trouble areas originates from TRID’s timing requirements, which are intended to give mortgage consumers accurate information on the costs of their loan at designated intervals in the process. Unfortunately, this timing creates a conundrum for lenders if borrowers request a change in the loan or an extension of the closing.

In August, the Community Home Lenders Association called this issue a potential “black hole” and asked the Consumer Financial Protection Bureau to clarify how lenders should proceed in a letter to CFPB Director Richard Cordray.

The TRID rule stipulates that a lender deliver the Loan Estimate to the borrower within three days after receipt of a loan application and at least seven days before consummation, which is defined as when the loan documents are signed. The CHLA warns that after the Loan Estimate is delivered to a borrower, a change in circumstances, such as the borrower needing to push the closing date, presents lenders with a dilemma.

“Specifically, when a borrower makes a request to delay the closing after the Closing Disclosure has been made, but more than seven business days before the new closing date, that there is no apparent legal way for the lender to disclose an increase in costs, for example in conjunction with a loan lock extension fee,” the CHLA said. “The timing of the requirements could create a black hole.” 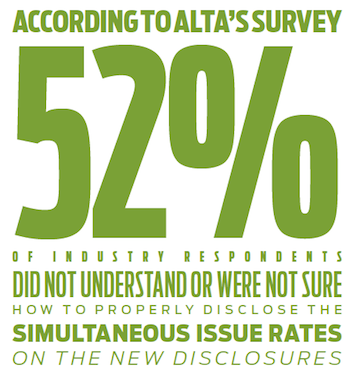 The CHLA said that in such a situation, it appears that the lender’s only option may be to absorb the increased cost, since the permitted tolerance would be exceeded and the lender cannot comply with requirements relating to a revised Loan Estimate.

The CHLA said that this is true even if the change or extension is requested or precipitated by the borrower.

“We do not believe that TRID rules are intended to put lenders and borrowers in such a situation, where loan changes or closing extensions are rendered problematic and lenders may have to absorb increased costs incurred as a result of a borrower’s actions or requests,” the CHLA said in its letter.

“However, in the absence of clear clarification from the CFPB, we are concerned that this is the result,” the CHLA continued. “Therefore, we respectfully request that CFPB take action to provide more specific guidance on this point, and to remedy the situation if a problem exists.”

When contacted by HousingWire in August, a CFPB spokesperson said that the bureau had received the CHLA’s letter and was reviewing it, but at press time there was no further response.

On another front, title companies are still waiting for clarification from the CFPB on delivering accurate quotes for title insurance costs. At a hearing before the House Financial Services Housing and Insurance Subcommittee in May, Diane Evans, president of the American Land Title Association, submitted testimony that outlined the issue.

“Unfortunately, the new disclosure forms prohibit our industry, by law, from disclosing the actual cost of the title insurance policies. This is because the CFPB has created a formula which — in most states — incorrectly discloses the cost of title insurance,” Evans testified.

“This is the only item that will be inaccurate on these new forms. Furthermore, the CFPB created a formula that is wrong in most states and prevents industry from using the best information reasonably available to them.”

“Consequently, TRID then requires the owner’s title insurance premium to be inaccurately disclosed on the forms… the result is that (in most states) the Closing Disclosure will not provide consumers with the accurate cost of title insurance,” Evans testified.

“If the bureau does not fix this issue, the disclosures will be wrong and fail to meet the goal of TRID to provide consumers better information regarding the costs of obtaining a mortgage,” Evans said.

“And it’s not just consumers who are confused by the bureau’s formula. According to ALTA’s survey, 52% of industry respondents did not understand or were not sure how to properly disclose the simultaneous issue rates on the new disclosures.

“ALTA believes that the best way to address this issue is to modify the Official Interpretations to allow our industry to disclose title premiums based on the same standards they must use for disclosing all other costs. This would let lenders communicate to the consumer the actual costs based on the best information reasonably available to the lender,” Evans said.

In the five months since that testimony, the CFPB has failed not only to provide a solution, but to provide any feedback at all on this issue.

And with the emphasis on front-end compliance, some post-closing issues are just now being considered. For instance, what happens if there is something wrong with the information that is disclosed to the consumer? How will lenders and title agents handle refunds after closing?

Kevin Wall, president of First American Title Insurance Company’s Mortgage Solutions group, explained that in the case of recording fees, for example, the actual fee is something that is often unknowable at the time of disclosure under TRID. In a purchase transaction, recording fees are almost always calculated on a per-page basis and one of the documents to be recorded is the deed. But under the disclosure timing mandated by TRID, the disclosure may often take place before the deed is even prepared.

“This is actually an area that is almost impossible to comply with,” Wall said. “Today the industry estimates the recording fees, based on the state and county, but there is no way to calculate it exactly ahead of time.

“You know that the estimate is going to be wrong — not intentionally wrong, it’s just that the deed in a purchase transaction may not have been prepared at that point in time,” Wall said.

Knowing this, there is likely to be a refund due to the consumer after closing. But who is responsible for the refund? The lender is liable for the refund, but the settlement agent will be holding the funds necessary to make the refund.

“There has not been a lot of conversation around which one is the authority here, and who’s going to make that decision,” Wall said. “There’s also a timing issue, since the clock starts ticking when the lender receives information that the actual recording fees did not equal the disclosed recording fees.

“There’s still some work to be done in the industry when it comes to the marriage between lender and settlement agent in regard to TRID,” Wall said.

WILL THEY OR WON’T THEY?

With these issues still outstanding, the industry has been united in calling for an extended hold-harmless period. In June, after major lobbying by a bipartisan coalition in Congress and a full-court press by industry trade groups, the CFPB announced a grace period for enforcement of the TRID rule.

From the CFPB’s letter to the Senate, answering their request for a grace period:

“As you have suggested, the bureau’s work to support the implementation of the rule does not end on the effective date of August 1, as we continue to work with industry, consumers and other stakeholders to answer questions, provide guidance, and support a smooth transition for the mortgage market,” Cordray’s response stated.

“As we do so, and in response to considerable input we have received from you and your constituents, I have spoken with our fellow regulators to clarify that our oversight of the implementation of the rule will be sensitive to the progress made by those entities that have squarely focused on making good faith efforts to come into compliance with the rule on time.

“My statement here of this approach is intended to ease some of the concerns we have heard about this transition to new processes in the coming months and is consistent with the approach we took to implementation of the Title XIV mortgage rules in the early months after the effective dates in January 2014, which has worked out well.”

That reassurance was welcome news to all the companies in the mortgage finance space struggling to comply with the rule, but was vague enough to be frustrating at the same time. The statement didn’t contain a definitive timeline, a point that was further confused when the CFPB moved the effective date to Oct.3.

David Stevens, chairman and CEO of the Mortgage Bankers Association, said at the time that the grace period was announced that it was open-ended to give Cordray added flexibility, not to cause concern.

“We don’t know how disruptive (or not) this implementation will be,” Stevens said. “If more time is needed, he keeps that flexibility. It seems at minimum through the end of the year – and we will all be assessing this roll out.”

But did the extra time from the original date of Aug. 1 mean that there was less of a grace period on the other end? No one knows, but many are asking for it.

Since the grace period was announced, several Congressional initiatives have been introduced to formally define it. In July, Rep. French Hill, R-Ark., introduced the Homebuyers Assistance Act (HR 3192) and as the Congress returned to Capitol Hill in September there was a full-on push from industry groups for Congress to take action (see list below). The MBA’s grassroots advocacy arm, issued this statement on Sept. 4:

“Yesterday the Mortgage Action Alliance issued a Call to Action, urging its members to contact their members of Congress in support of legislation that would provide a temporary enforcement grace period and legal safe harbor to ensure smooth implementation of the new TILA-RESPA Integrated Disclosures rules for lenders that make a good-faith effort to comply.

“In the House, H.R. 3192, the Homebuyers Assistance Act, introduced by Rep. French Hill, R-Ark., would provide a legal safe harbor for lenders through February 1, 2016. The bill was approved by the House Financial Services Committee in late July.

“In the Senate, S. 1711, introduced by Sen. Tim Scott, R-S.C., would provide a similar legal safe harbor through January 1, 2016. The bill was included in the regulatory relief package that was reported from the Senate Banking Committee earlier this year.

With a number of still-unresolved issues growing, the grace period has once again taken center stage. The CHLA, for instance, said that the “black hole” issue is a good example of why the CFPB needs to institute a longer hold-harmless period.

This issue “illustrates how easy it might be for a party to be making a good faith effort to comply with the new TRID requirements, but either slip up on some technical point or not fully understand precisely how the CFPB will interpret how these new requirements should be complied with,” the CHLA stated. 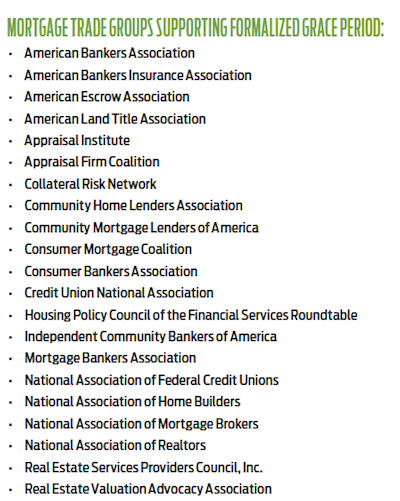