Today, the Bureau of Labor Statistics reported 210,000 jobs were created in November — a miss from estimates. They also reported 82,000 in positive revisions to the previous jobs report. The unemployment rate is currently at 4.2%. For men and women age 20 and over, it stands at 4.0%. Job reports can be wild, and we often have two to three reports per year that miss estimates badly. However, be mindful of positive revisions and remember that we have over 10 million job openings and jobless claims recently had a print that we haven’t seen since 1969. My premise is that we should get all the jobs lost to COVID-19 by September of 2022 or earlier.

From BLS: Total nonfarm payroll employment rose by 210,000 in November, and the unemployment rate fell by 0.4 percentage point to 4.2 percent, the U.S. Bureau of Labor Statistics reported today. Notable job gains occurred in professional and business services, transportation and warehousing, construction, and manufacturing. Employment in retail trade declined over the month.

Here is a look at the progress of the unemployment rate, which stands at 4.2%. 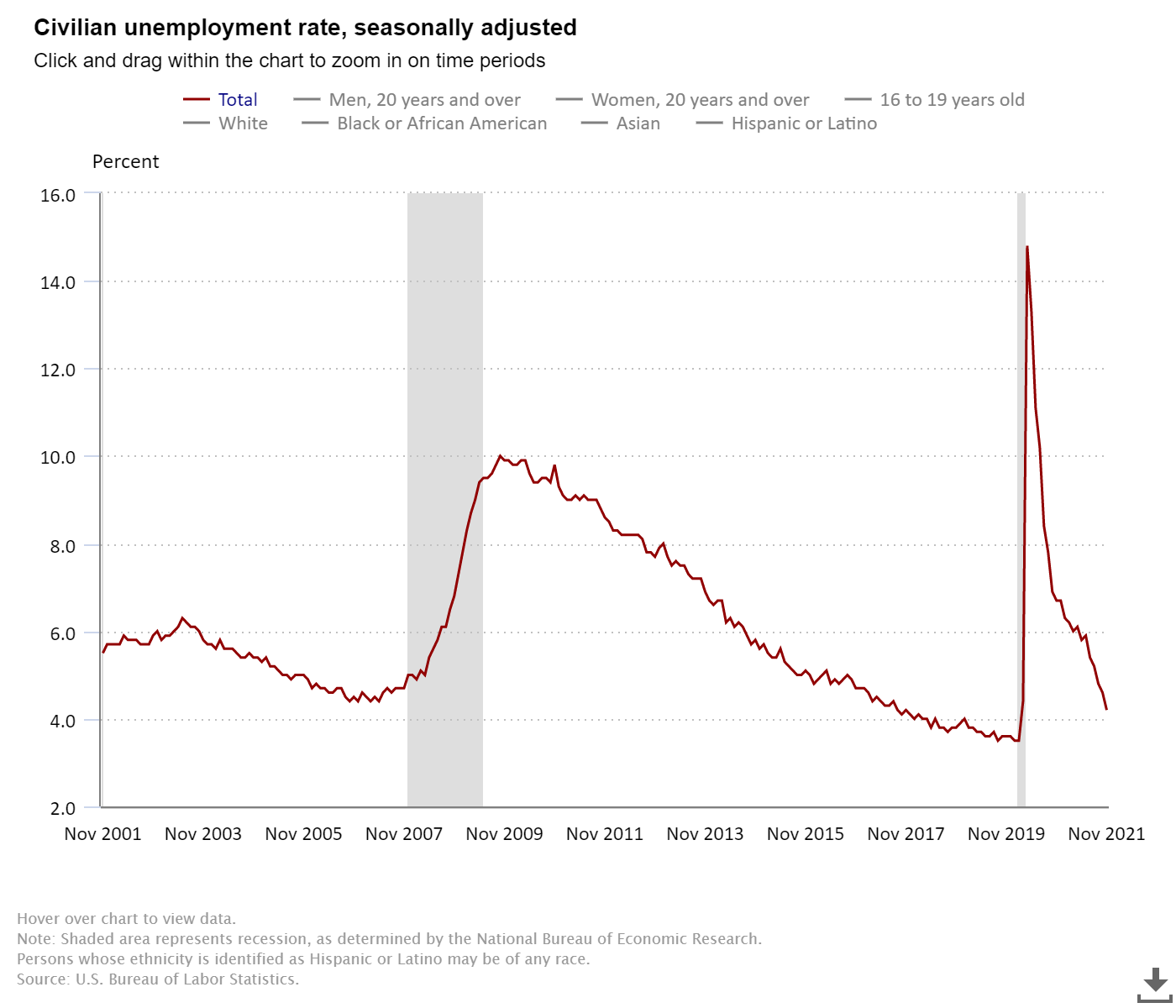 When we adjust the numbers to men and women ages 20 and over, the unemployment rate is at 4%. 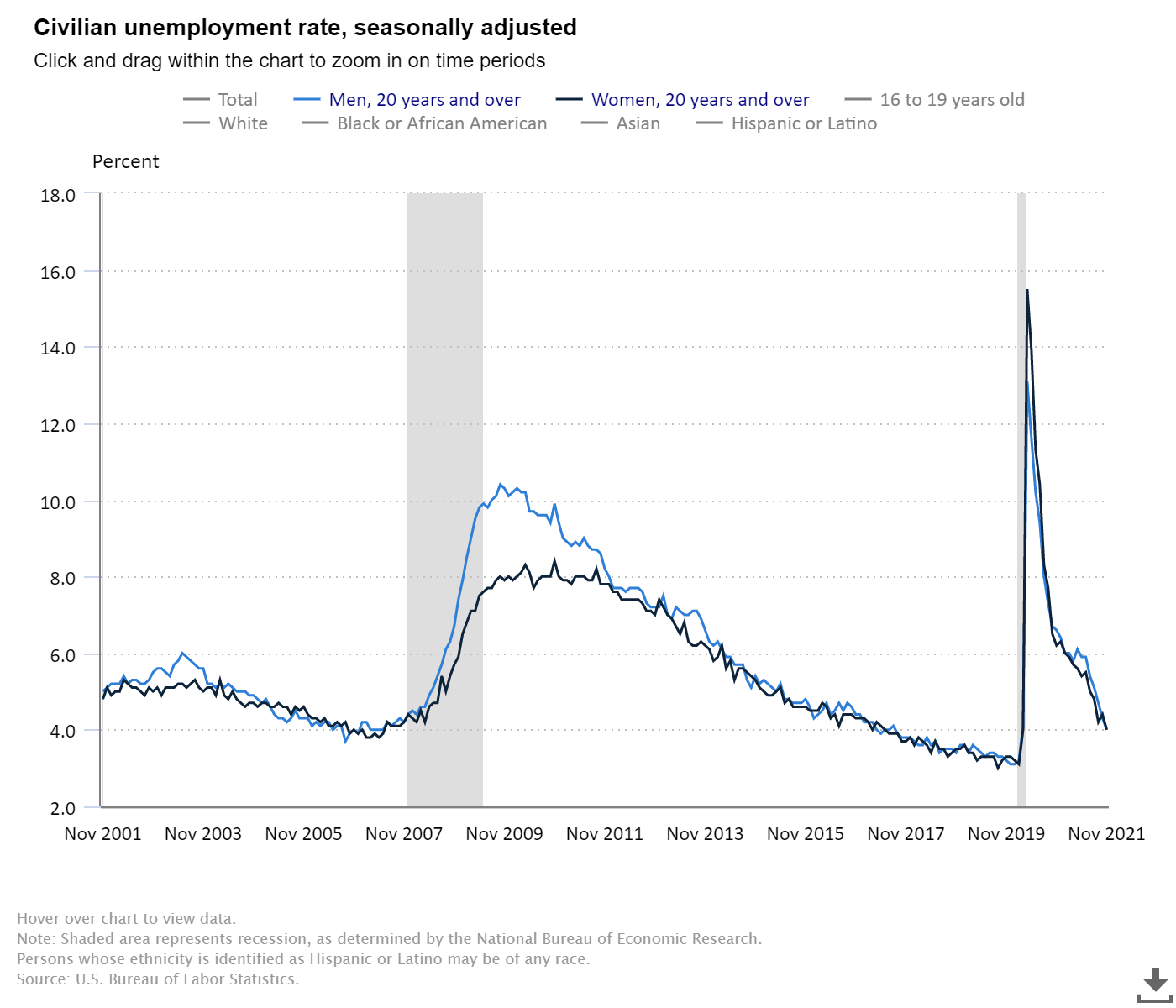 The U6 unemployment rate, which has been historically used by American bearish people to say the labor market isn’t great, is currently below what we saw in the best levels before the great financial crisis. Basically, it’s very rare for this data line to be below 8%, but we got there today. My best advice is to ignore people who use this data line out of context. Currently, it stands at 7.8% and near the levels we saw right before COVID-19 hit us. 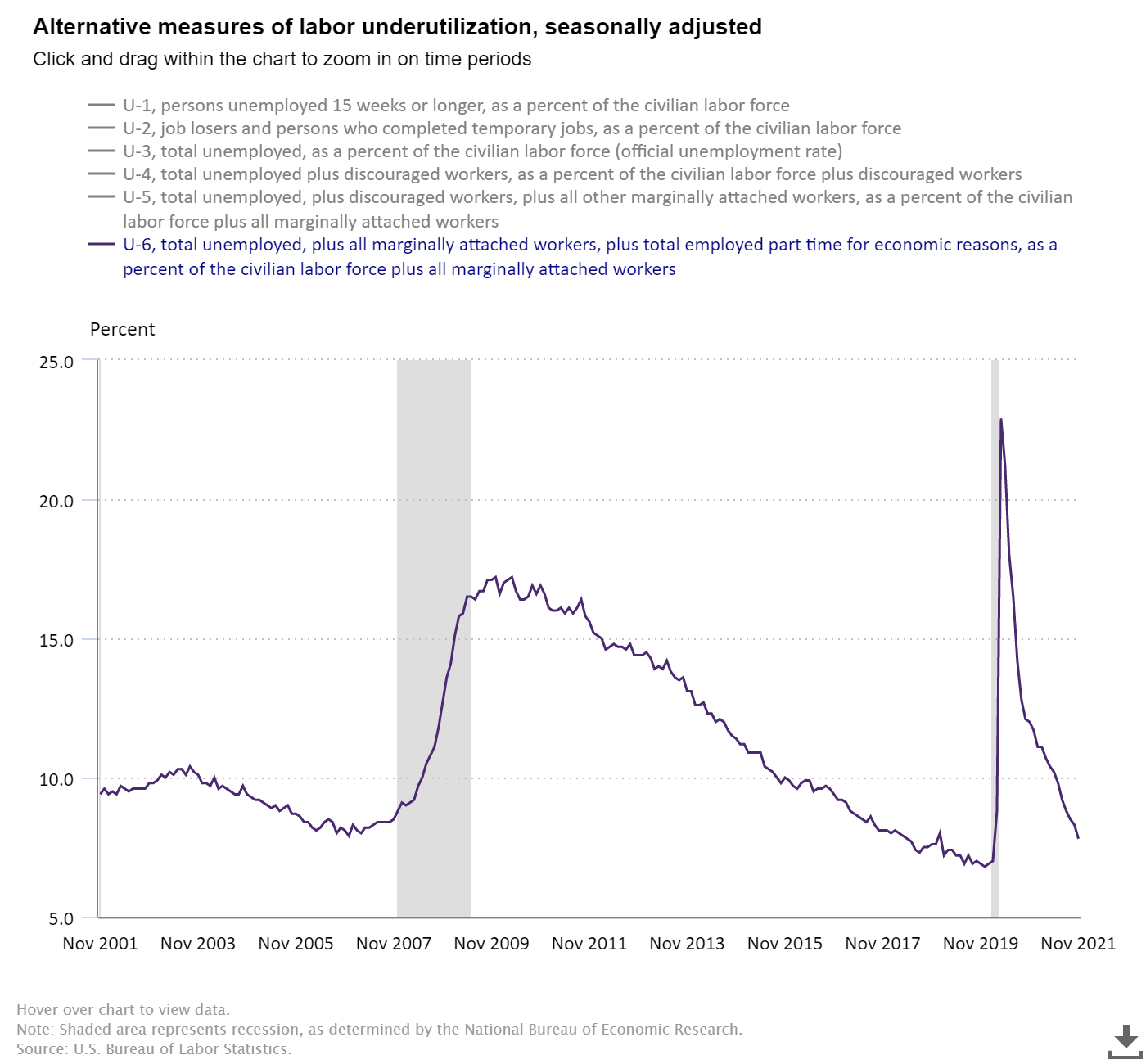 During this recovery, a big theme of my jobs and labor market analysis was that job opening should get to 10 million plus. I had tweeted the phrase #JOLTS 10,000,000 well before the job openings data took off in that direction. Unlike other people, I don’t believe in the conspiracy theories that there are many Americans who have not been working since 1945 but have been able to feed themselves, buy or rent shelter and purchase clothes.

Like a lot of my economic work, there are limits to what can be done due to population growth slowing and the fact that no country has a Dorian Gray labor market: death and aging are potent economic forces that can’t be changed. In the end, nature always wins, and nobody can live or work forever.

As you can see below, the trend is your friend, and job openings were near 7 million before COVID-19 hit us. Every month the Baby Boomers get older and older, and some leave the workforce for good. However, we do have parts of America that lack prime-age labor force growth, so the young replacing the old isn’t uniform across all regions.

With that said, the household survey jobs data showed job gains of over a million jobs. We do have enough labor to get back to pre-COVID-19 levels and I do expect over time to see significant positive revisions to jobs data this year. I have been counting the months to see if my forecast would be correct.

With 10 months left until the end of September 2022, let’s see how much progress we need.

Here is a look at the job gains and losses reported today. Of note, as you can see below, this is an excellent report on construction job growth. Let’s not forget that the builder’s confidence data has risen lately. 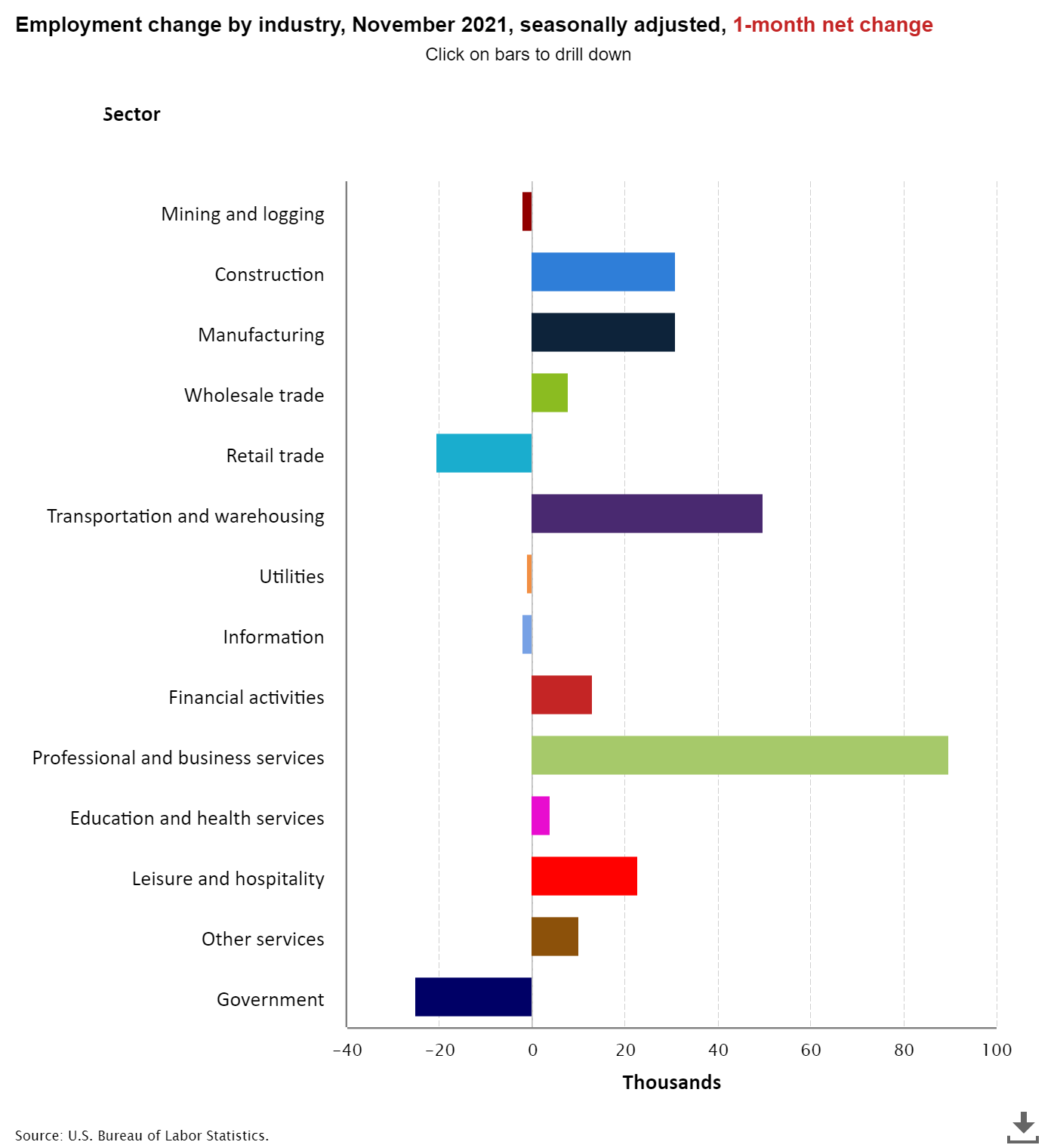 Remember that when looking at jobs data, it’s always about prime-age labor force data for ages 25-54. The employment-to-population percentage for prime-age labor force is 1.9% away from being back to February 2020 levels. The jobs recovery in this new expansion has been much better than what we saw during the recovery phase after the great financial crisis.

Most people who want to work in our country are employed on a regular basis. Not surprisingly, the lower portion of the educational and skilled attainment population tends to have a higher unemployment rate. This is why I created the #ATighterLaborMarketIsAGoodThing. We want to see the kind of unemployment rates that college-educated people have spread to the other sectors!

Here is a breakdown of the unemployment rate and educational attainment for those 25 years and older.

We have legs to keep the jobs data going for some time. However, we are now on our fifth wave of COVID-19 cases increasing with a new variant called Omicron, which is already in 38 countries. So, what will this do to mortgage rates, the economic data, and the bond market? While the Delta variant didn’t crush economic data as COVID-19 did in March and April of 2020, it did slow some aspects of the economy down. So, if Omicron is worse than Delta, we have to add that new variable into the equation for 2022. Regarding the bond market and the first Fed rate hike, that is a different story altogether. 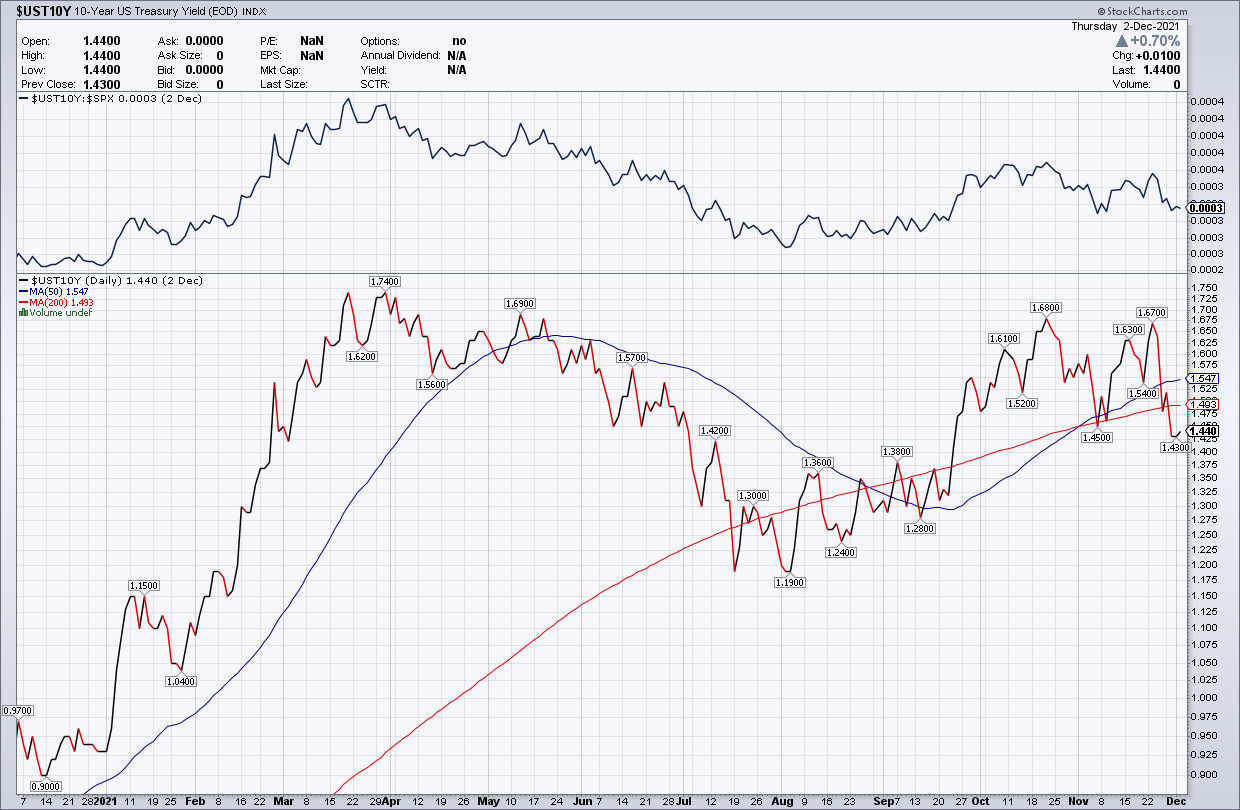 Even with talk about the first Fed rate hike and tapering, a boom in economic growth and hot inflation, the 10-year yield is currently at 1.36%. I recently talked about mortgage rates, bond yield, and how Omicron might impact these factors in a new podcast, The Rundown, with Editor in Chief Sarah Wheeler.

One thing that I am noting when talking about this expansion is that we are no longer early in an economic expansion. With the unemployment rate at 4.2% and the 2-year yield above 0.56%, my first recession red flag is up!

Now, this doesn’t mean a recession is about to happen, but my work has always included connecting the dots between economic expansion and recession. In the previous expansion, I rose my first recession red flag when the unemployment rate was at 4.9%. My second red flag will be when the Federal Reserve hikes rates.

These are relatively low-level risks and happen in a more mature stage of the economic recovery than where we are today. The economy is on fire and the labor market is tighter than people want to give it credit for. The retail sales numbers are a great example of how hot economic data has been in America. These numbers have deviated from historical norms in the biggest fashion I have ever seen in my life and have not shown the moderation that I had been expecting.

For HousingWire HW+ readers, I am going to give an economic cycle health update after every job report, tracking the economic cycle with my recession red flag model in more depth now that we are at this stage of the economic expansion. I recently wrote about what to look for when housing and the economy are really showing weakness. For me personally, this is where the fun in economic data tracking happens and where once again, real economic data ballplayers show their game. We will all go through every economic expansion and recession together — one data line at a time.

This week’s HW+ member spotlight features Reina Ramos, senior vice president, mortgage market leader at City National Bank of Florida, as she discusses what issues in the housing market keep her up at night.