On Tuesday Zillow announced it will be shutting down its Offers business, which wasn’t too much of a shock considering how their stock had been performing for some time. The news was that they had been overpaying for homes and their losses on those purchases were getting larger and larger. Life being a publicly traded company can be fantastic or brutal at times.

“We’ve determined the unpredictability in forecasting home prices far exceeds what we anticipated,” Zillow CEO Rich Barton said in a press release as part of the company’s third-quarter earnings report. “Continuing to scale Zillow Offers would result in too much earnings and balance-sheet volatility.”

Forecasting home prices isn’t easy if the goal is to get a reasonable rate of return, since rate-of-growth pricing matters more in that scenario. One of the reasons why I stressed earlier this year that the rate of growth in home prices would cool off is that we didn’t have a credit boom this year, like what we saw from 2002-2005. After you make some COVID-19 adjustments, demand is stable, not booming.

From my article in April: “This is my take on the reason why we saw double-digit year-over-year growth earlier this year. One thing that happened last year is that existing home sales never got back to 5,710,000 – 5,840,000. This was the level I had been talking about last year that should be the target due to how February 2020 sales were going.

The point I was making with this data in April is that the early housing demand growth year over year — which looks great on paper — has more to do with make-up demand in 2020 spilling forward into the early part of 2021. While demand is solid and in the existing home sales range of 5,840,000 – 6,200,000, which I have talked about on HousingWire a lot this year, this isn’t booming credit demand but very stable.

Zillow is also cutting 25% of its workforce due to the closure of this side of its business. Zillow did have big plans for this business to grow over the decade, but sometimes wrong models don’t get caught early on.

Zillow’s stock price spoke volumes recently as their downtrend from earlier in the year was grabbing some people’s attention, but the recent news of more losses on their iBuying business just forced their hand. When you’re a publicly traded company, things are different — shareholders come first, so when your stock turns on you, choices need to be made.

As you can see below, Zillow’s stock price hit a peak early this year around $208, and this chart looks much like the 10-year yield since 1981. (Hint: Respect the downtrend; the market is telling you something.) 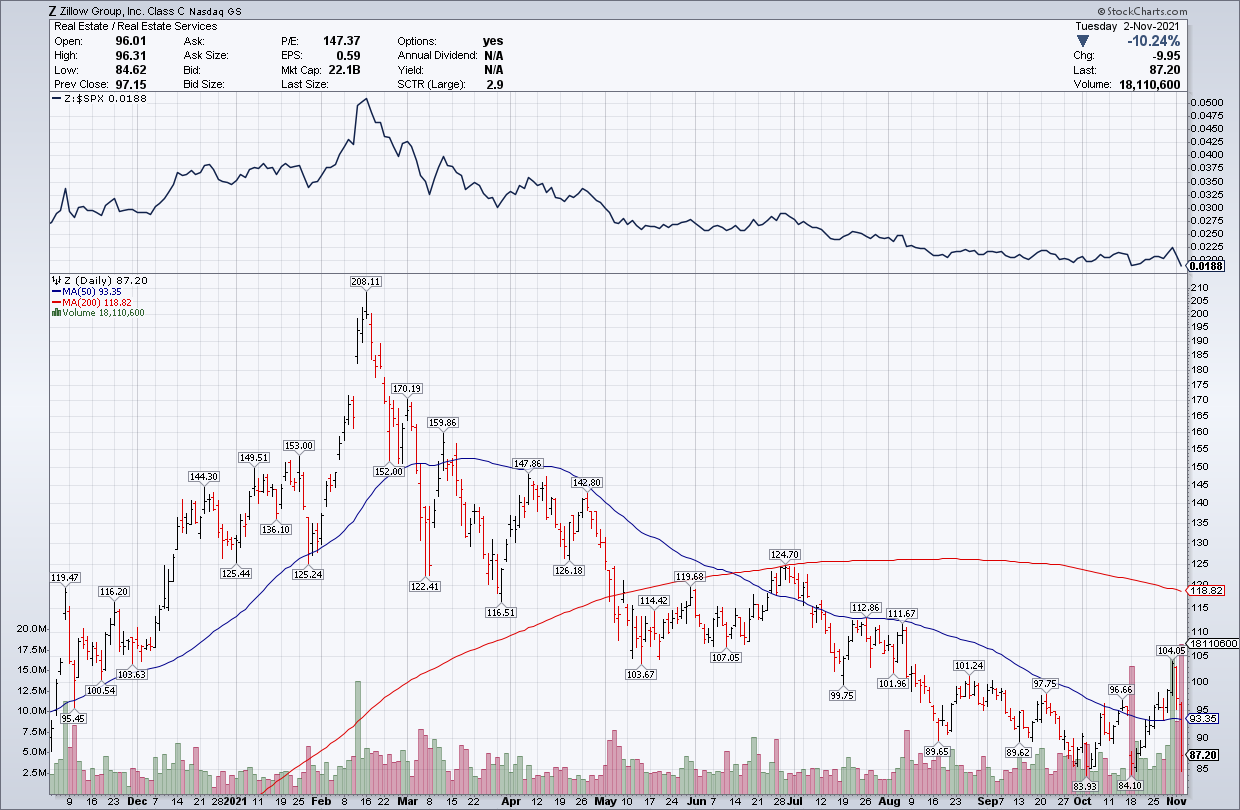 My common phrase in housing has been the same for a long time: Housing is the cost of shelter toward your capacity to own the debt, it’s not an investment. I have said this for many years so people can focus on the economics of housing, not the money-making aspect of housing. We can lose perspective on what drives housing economics when thinking only about price.

This was an issue for me in the previous expansion as I was trying to get people to focus on the fact that the housing marketing was having its weakest recovery ever, based on new home sales, housing starts, and mortgage demand. Not many people cared much for this because prices of existing homes got a lot of attention and that has been rising since 2012. 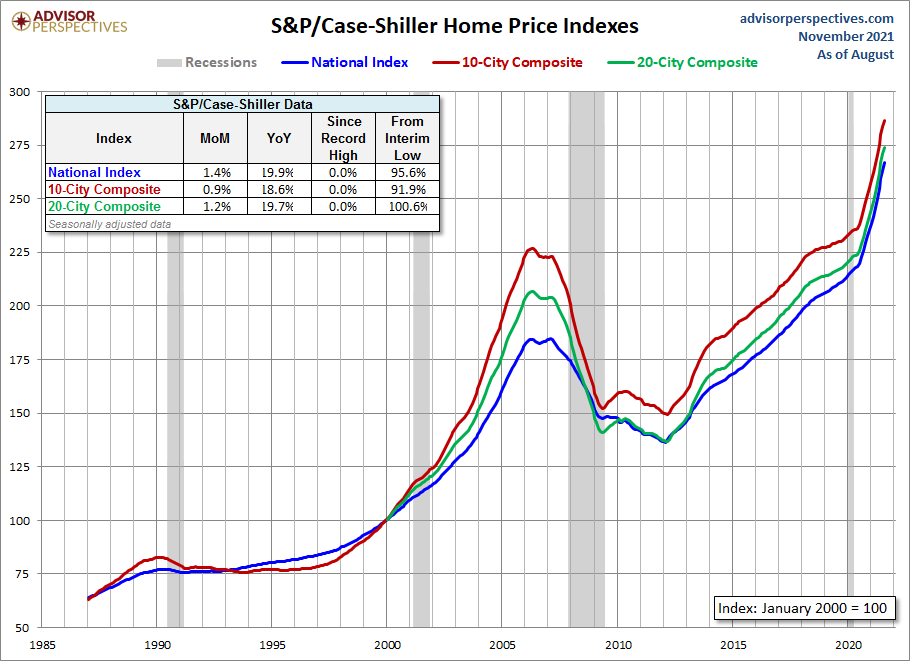 What happened with pricing in 2020-2021 has been very unhealthy, which is why I think the biggest risk to the housing market this year is home prices overheating. That has happened. However, if you’re a homeowner, it doesn’t really mean anything, except you’re building more nested equity.

If you’re trying to buy a home with the inventory at all-time lows, it hasn’t been a lot of fun. This is why the surveys we have seen show that homebuyers feel sour, not because they’re giving up on their demand, it’s just that the competition is too much. This is why I stress that growing the days on market will be the best thing for housing. We want a B&B market: boring and balanced. 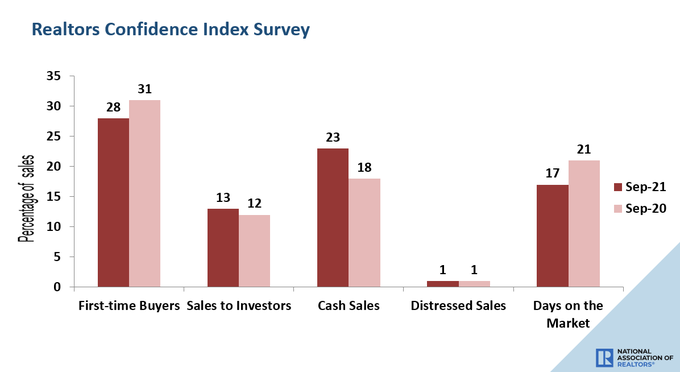 In a recent article for HousingWire, I wrote about how my housing price model has broken to the upside. A normal market during the years 2020-2024 would have had 23% cumulative price growth on a nominal basis. We have just blown past that in less than two years. 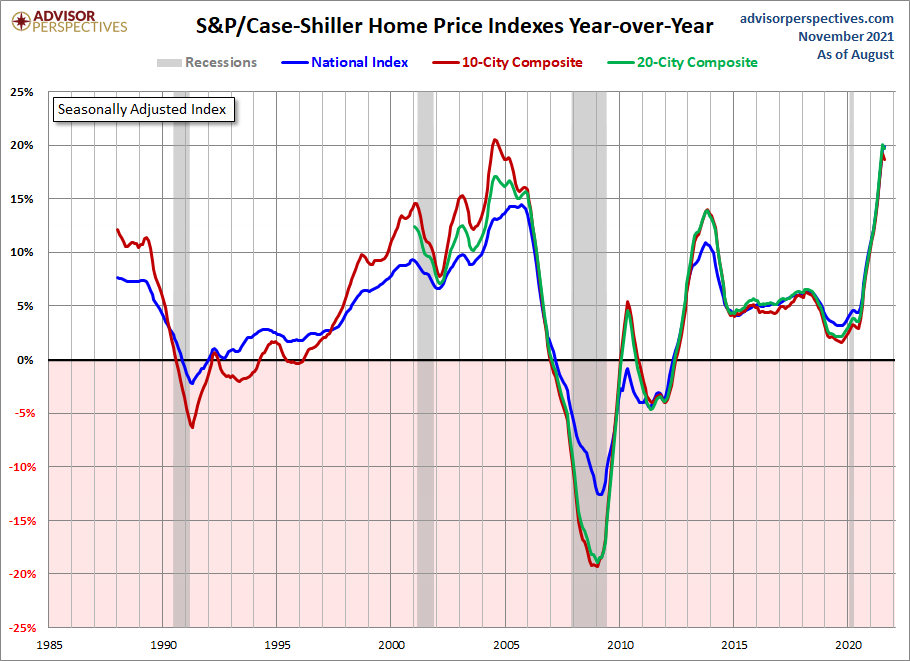 In that article, I talk about how I would love to see the next three years of home prices come in a negative 3% cumulative decline, but I also know how hard it would be for that to happen with the running variables we are seeing today.

Back in April, I wrote that home-price growth would cool down. Naturally, the rate of growth in pricing can’t be sustained while mortgage demand, while stable and healthy, wasn’t booming. When you don’t have a credit boom, housing has limits. Naturally, we saw the seasonality of inventory rise and current inventory levels are now doing the natural decline that comes in the fall and winter.

While demand is stable, the pricing rate of growth has gone off the charts. This can’t be sustained and I am surprised Zillow thought this would be the case if they need to sell at a certain price. When you make housing an investment, then price and cost are what matter more.

Money-making from real estate isn’t my thing, but I made my retirement happen in the stock market and I do understand this aspect of the marketplace. The builders will never overbuild housing because they need to protect their margins at all costs. Zillow was too aggressive in their buying, losing money and the market turned on them and they got caught.

Remember, that this is happening without rates rising. Money talks and in the end you’re dealing with a company that has to show a profit or expand its reach.

Homeowners, on the other hand, are different because they just want to buy a home to live in. It’s the cost of shelter and this is why more Americans are buying homes in the years 2020-2021 than any single year from 2008-2019 because they need shelter. So much of the housing economic discussion is lost because all the hype is based on price. Hopefully, years 2020 and 2021 have shown you that demographics and the need for shelter trump profits.

However, when you’re dealing with Wall Street, investing to make money on housing, and looking at housing as only what comes out on the profit/loss statement, you can get caught up in the hype. Zillow got into the investing business, but instead of flipping homes for a profit, they resold homes for losses, and wall street had enough.

Don’t ever forget that economics done right is always boring. Housing economics should be very boring, but housing investment is an entirely different ball game. If you’re trying to make an economic story off what just happened to Zillow, you’re doing it wrong, just like every housing crash troll bear on Twitter, YouTube, and Facebook has been wrong since 2012. As always, be the detective, not the troll.