The National Employment Report revealed that private sector employment increased by 195,000 jobs from July to August, growing the most in the service-providing sector.

Jobs in the good-producing sector, including construction and manufacturing, experienced an increase in August. However, mining took a hit last month as employment in the industry fell, according to ADP Research Institute and Moody’s Analytics.

“In August we saw a rebound in private-sector employment,” said Ahu Yildirmaz, vice president and co-head of the ADP Research Institute. “This is the first time in the last 12 months that we have seen balanced job growth across small, medium and large-sized companies.” 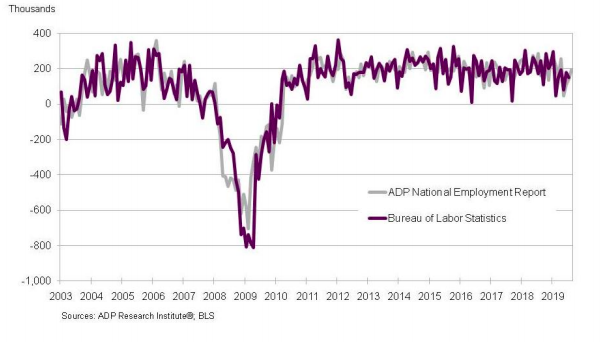 Below is a breakdown of job segments that saw changes in employment between July and August:

The service-providing sector increased by 184,000 jobs, including:

“Businesses are holding firm on their payrolls despite the slowing economy,”said Mark Zandi, chief economist of Moody’s Analytics. “Hiring has moderated, but layoffs remain low. As long as this continues, recession will remain at bay.”