Choosing where you live during retirement is a large feat, one that requires years of planning.

If you’re aiming to retire in your mid-60’s, AARP recommends saving 10 to 12 times more than your current income. Where can you plan to retire to with that?

SmartAsset looked to answer that question and released a list of the top 10 places to retire early. The company's study ranked locations on factors such as local climate and taxes. SmartAsset also looked at housing cost compared to income and annual health insurance rate.

Arizona, Nevada and Kentucky are the most common states found when picking the most affordable cities to live in for an early retirement.

The No. 1 place to retire to is Henderson, Nevada. There, the annual cost of living is $20,672, and Social Security income and public and private pension income aren't taxed, with median housing costs less than 22% of median household incomes. The annual cost of health insurance is $9,396.

Seven of the states are in considerably favorable tax environments for early retirees. Florida and Nevada even have no state income tax.

Coincidentally, most of the locations on the list are in warmer climates, offering bearable winters and summers.

Check out the graphic below for the top 10 cities for an affordable early retirement. 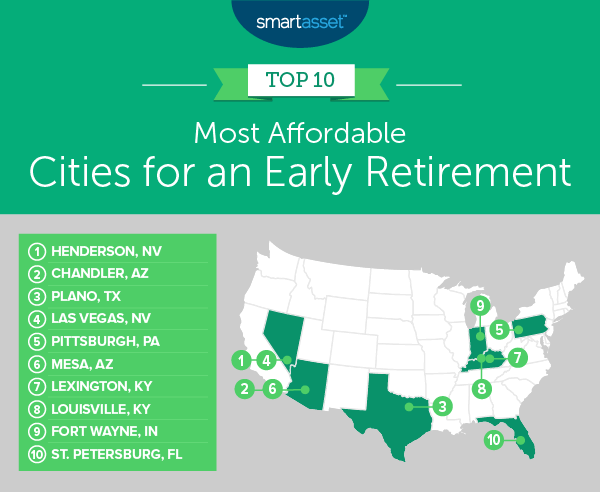 HousingWire recently spoke with Armando Falcon, CEO of Falcon Capital Advisors, about the continued growth of digital mortgage solutions such as eClosings and what lenders can do to implement eMortgages into their business models.