While affordability has fallen across the board, reports often suggest that metropolitan cities are experiencing the most dramatic declines. However, a report from LendingTree highlights that homeowners living in America’s small towns are also feeling the burn.

“Ultimately, our study indicates that people who live in towns can experience the same kinds of issues related to housing affordability and wealth inequality as city dwellers,” LenidngTree writes. “In some cases, these issues can be even more prevalent in towns than in cities.”

In order to determine the housing market’s most expensive towns, LendingTree calculated the likely monthly payment and down payment for a median-priced home in a given micropolitan area.

According to their data, Vineyard Haven, Massachusetts; Summit Park, Utah and Breckenridge, Colorado are the nation’s most expensive towns.

While high levels of wealth tend to pool in each of these towns, LendingTree notes that the majority of homeowners in these markets make an income well under the national household average.

“The majority of the towns featured in this study are unaffordable for the median income earner living in them,” LendingTree writes. “Both renting and owning a home are out of reach for median income earners in 42 of the 50 towns looked at in this study. This suggests that many people who work in the towns featured in these studies don’t necessarily live there, and instead commute.”

LendingTree says while it may seem counterintuitive to have such a large supply of homes that are unaffordable to the majority of people living in an area, it makes sense as many of the most expensive towns in the country are considered resort or destination towns.

“Vineyard Haven, Massachusetts is located on Martha’s Vineyard, a common vacation spot for the wealthy from nearby cities like Boston or New York,” LendingTree writes. “Because many people who live in these towns do not live there year-round, and otherwise make the bulk of their income elsewhere, they can afford to buy homes well outside of the price range of the average townsperson.”

LendingTree claims this demand for expensive luxury homes, as well as certain building restrictions in towns like Jackson, cause home prices to skyrocket and help lead to serious income and wealth inequality.

“As our study makes clear, living in a small town does not necessarily make the cost of living more affordable,” LendingTree writes. “Many people living in the towns featured in our study would have an easier time affording a home in a major metropolitan area than in their current area.”

This image highlights the nation’s ten most expensive towns: 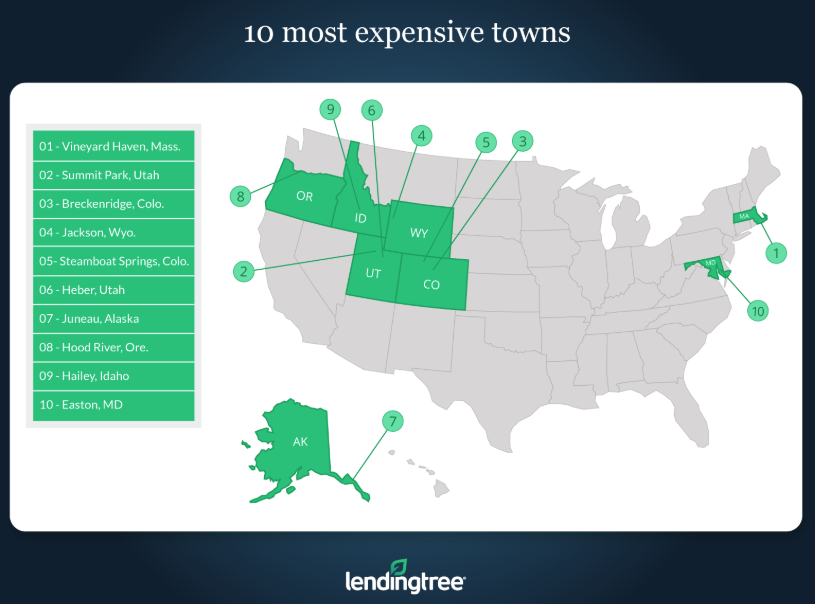 NOTE:  For the purposes of this study, LendingTree used micropolitan level data to approximate town level data. When determining whether or not a home was affordable, LendingTree assumed that an income earner could afford a 20% down payment on the median home value in their area, while receiving a mortgage loan at a rate of 4.6%.