Baltimore, Maryland, is the best place for nurses to live if they want to buy homes, according to a report from PropertyShark that compares salaries and home prices in cities it designated as medical hubs.

It takes 1.7 times the median annual wage for nurses to purchase a median-priced home in Baltimore, the state’s largest city, according to the report. No. 2 is Philadelphia, where it takes 1.8 times the median wage of nurses to buy a median-priced home. Pittsburg, Pennsylvania, was No. 3 at 2.1, St. Louis, Missouri, was No. 4 at 2.3, and Chicago was No. 5 at 3 times annual wages.

“We get a picture of growing affordability struggles in most top medical hubs, even for an industry that pays above the national median,” the report said.

Nursing, already one of the most common U.S. professions, is expected to expand 15% through 2026, adding almost 440,000 new jobs nationally, according to an estimate from the Bureau of Labor Statistics. Currently, about 1 in 53 Americans is a nurse, according to PropertyShark.

The worse city for a nurse to buy a home is San Francisco, where it takes 10 times the median annual salary.

“The epitome of sizzling hot West Coast real estate markets, San Francisco is in a category of its own,” the report said. “Nursing wages registered a 36% increase since the recession, clocking in at $132,430 in 2018 – the highest in all of the markets we analyzed. However, that wage growth was accompanied by the meteoric rise of home values.”

After San Francisco, the second priciest city was Los Angeles, where it takes 7.1 times a nurse’s median income to buy a home, followed by New York at 7, and Boston at 6.7, the PropertyShark report said.

Because of a spike in home prices in Nashville, Tennessee, the wage ratio rose to 4.5 from 2.8 in 2008, the biggest jump in the report.

“Of our 12 focus cities, only five offer an affordable housing market for nursing professionals – 10 years ago seven were affordable,” the report said. 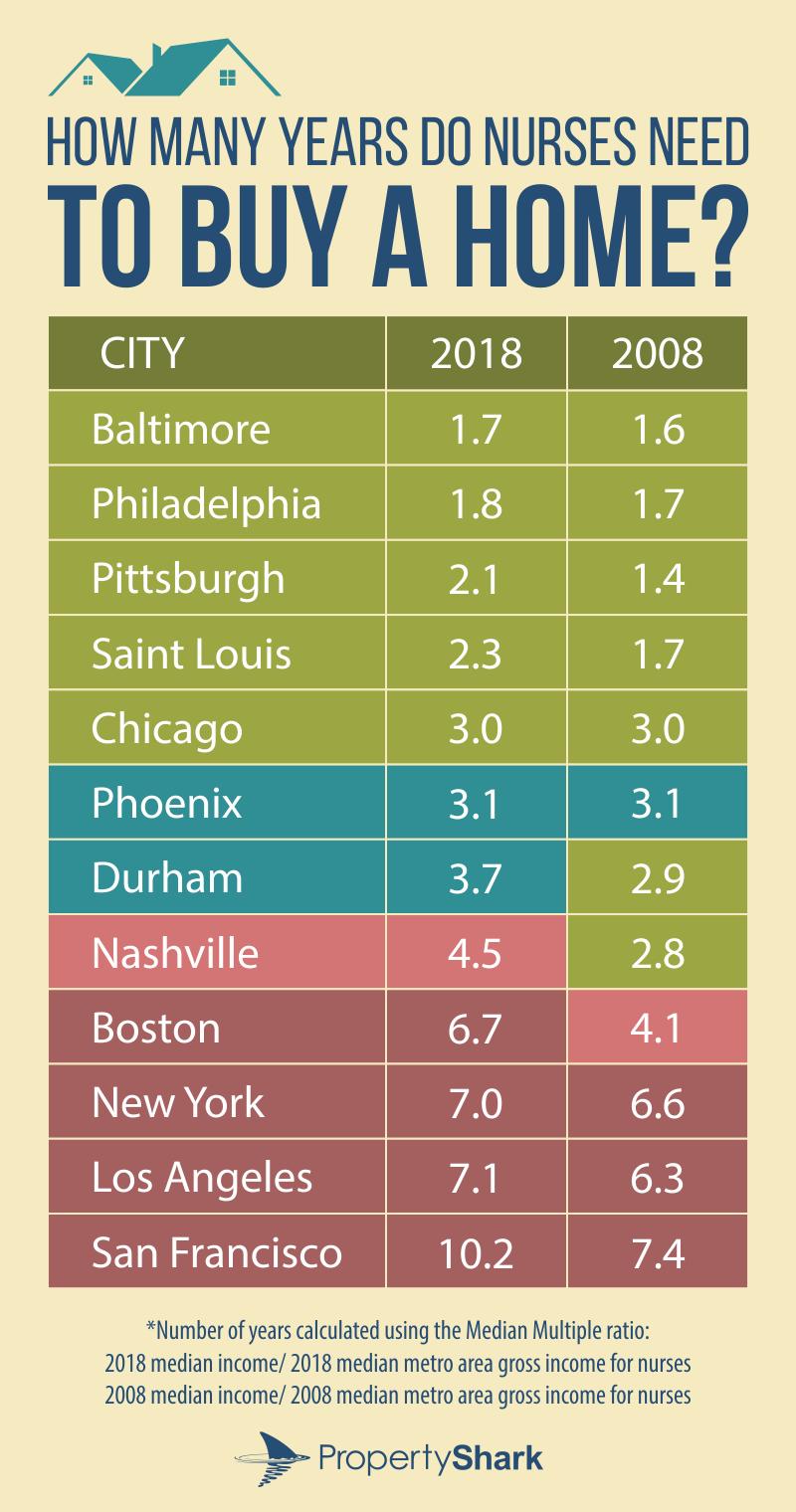 In recent days, both Quicken Loans, the nation’s largest lender, and The National Association of Realtors, the nations’ largest trade organization, have called on the Department of Housing and Urban Development to withdraw its proposed rule to amend the HUD interpretation of the Fair Housing Act’s disparate impact standard.