In March, annual home-price gains continued to slow across the nation, according to the latest Case-Shiller Home Price Index from S&P Dow Jones Indices and CoreLogic.

Home prices in March increased 3.7% nationwide from a year ago, sliding from the 4% annualized gain in the previous month's report. 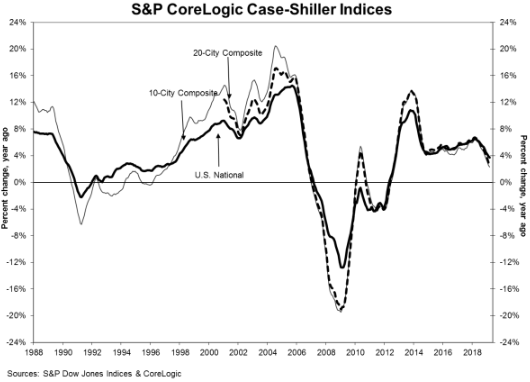 Before seasonal adjustment, the National Index decreased 0.6% month over month in March. The 10-City Composite and the 20-City Composite both posted 0.7% month-over-month increases.

“Mortgage rates are at 4% for a 30-year fixed rate loan, unemployment is close to a 50-year low, low inflation and moderate increases in real incomes would be expected to support a strong housing market,” Blitzer said. “Measures of household debt service do not reveal any problems and consumer sentiment surveys are upbeat.”

So, what could be responsible for the housing market’s cool down? Blitzer said he suspects the difficulty facing housing may be home prices that are too high.

“At the currently lower pace of home price increases, prices are rising almost twice as fast as inflation: in the last 12 months, the S&P Corelogic Case-Shiller National Index is up 3.7%, double the 1.9% inflation rate,” Blitzer continued. “Measured in real, inflation-adjusted terms, home prices today are rising at a 1.8% annual rate. This compares to a 1.2% real annual price increases in housing since 1975.”

“The shift to smaller price increases is broad-based and not limited to one or two cities where large price increases collapsed,” Blitzer said. “Other housing statistics tell a similar story.”

According to the report, Las Vegas, Phoenix and Tampa continue to report the highest year-over-year gains among all of the 20 cities.

“The patterns seen in the last year or more continue: year-over-year price gains in most cities are consistently shrinking. Double-digit annual gains have vanished. The largest annual gain was 8.2% in Las Vegas; one year ago, Seattle had a 13% gain,” Blitzer said. “In this report, Seattle prices are up only 1.6%. The 20-City Composite dropped from 6.7% to 2.7% annual gains over the last year as well.”