When the Federal Reserve released on Thursday its Survey of Household Economics and Decisionmaking, known to economists as the SHED report, the biggest number covered by the financial media was: Four in 10 American adults wouldn’t be able to cover an unexpected $400 expense.

But buried in the 64-page annual report there were nuggets about the housing market. For example, people said the most important neighborhood amenity is a grocery store. About 87% of respondents said it is “moderately or very important” to have nearby.

Next on the list of desired neighborhood amenities was a combined category of “shops or restaurants,” which 75% of people cited as being important to have nearby. The next slot went to banks, with 65% of people citing them as important, then places of worship, at 48%, a library, at 48%, a park or playground, at 43% and public transportation, at 37%.

Another housing-related data nugget was insight on “boomerang kids,” the pop term for adult children who return to live at home. About 61% of Americans ages 18 to 21 years are living with parents, according to the Fed report. The share drops to 51% for 22- to 24-year-olds and 26% for 25- to 29-year-olds. About 13% of 30- to 39-year-olds continue to live with their parents.

The reasons for being a “boomerang kid” were interesting. As expected, saving money is No. 1, but there’s a hefty share who say they've returned home to provide financial support to their parents or to help care for them. And then there are those social kids who say their reason is they “prefer living with others,” and apparently prefer their parents to people their own age. Averaging the four age groups, three out of every 10 kids would pick a parent over a peer to live with. Nice! 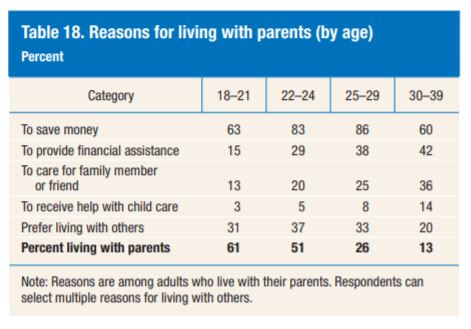