The government has made mortgage credit more readily available in the last few months than it has been at any point over the last 10 years, a new report from the Urban Institute shows.

According to the new analysis from the Urban Institute, the level of mortgage credit available for loans backed by the Federal Housing Administration, Department of Veterans Affairs, and Department of Agriculture was higher during the fourth quarter of 2018 than it was during any quarter since 2009.

The details come courtesy of the Urban Institute Housing Finance Policy Center’s credit availability index (HCAI), which measures the percentage of owner-occupied home purchase loans that are likely to default.

According to the Urban Institute, a lower HCAI means that lenders are “unwilling to tolerate defaults and are imposing tighter lending standards,” thereby making it more difficult to get a loan, while a higher HCAI shows that lenders are “willing to tolerate defaults and are taking more risks,” therefore making it easier to get a loan.

And the HCAI rose in the fourth quarter, meaning that mortgage credit become more available than in the previous quarter.

The overall HCAI, which includes loans backed by Fannie Mae or Freddie Mac; loans backed by the government (FHA, VA, USDA); and loans either held in portfolio or backed by private capital, rose from 5.75% in the third quarter to 5.85% in the fourth quarter. 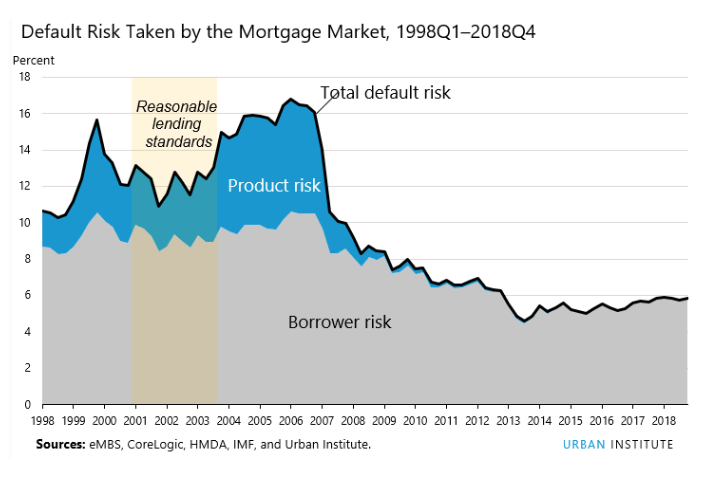 And while that increase may not seem like a lot in the scheme of things, mortgage credit availability for government-backed loans and those backed by the government-sponsored enterprises rose to post-crisis highs.

As stated above, mortgage credit availability for government-backed loans, as determined by UI’s index, rose to 11.8% in the fourth quarter, its highest level since 2009.

According to the UI report, the total default risk the government was willing to take on bottomed out at 9.6% during the 3rd quarter of 2013.

Then, over the past nine quarters beginning in the fourth quarter of 2016, the risk in the government-backed loans has “risen significantly” from 9.9% to 11.8%, the UI said in its report.

But despite that increase, the risk allowed by the government is still well below what it was before the housing bubble. According to the UI report, back in the pre-bubble days, the risk was almost double what it is right now, varying between 19% and 23%. 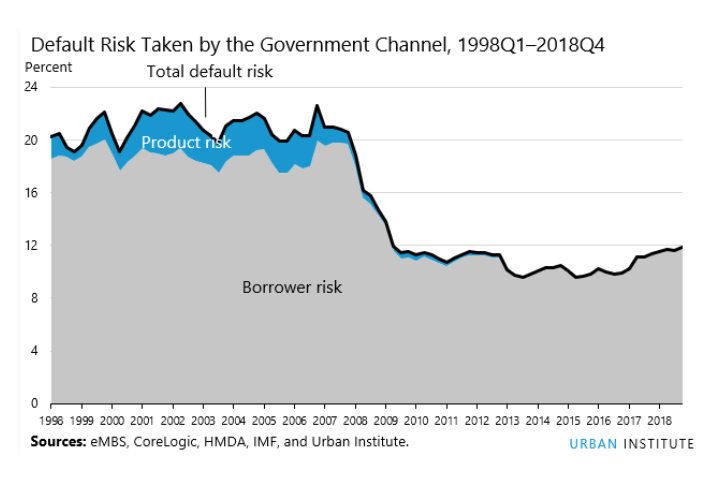 Additionally, as the Urban Institute notes, mortgage credit availability for GSE-backed loans has been on the rise since the financial crisis. In fact, the GSE credit index hit 3% in the third quarter. That was the first time it’s been that high since 2008.

And that trend continued in the fourth quarter, with GSE mortgage credit becoming even more available during the last three months of 2018.

According to the UI report, from the second quarter of 2011 to the fourth quarter of 2018, the total risk taken by the GSEs has more than doubled, rising from 1.4% to 3%. 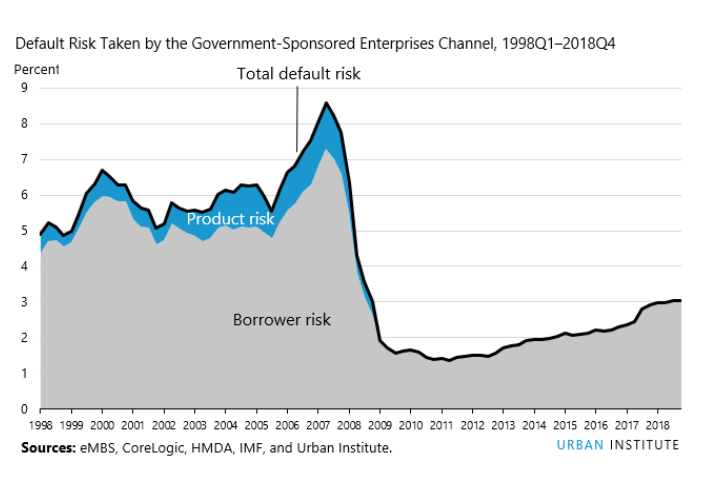 Borrower risk also rose sharply among loans either held in portfolio or those backed by private capital. According to the UI report, borrower risk increased “substantially” in the fourth quarter of 2019, driven by a “decline in FICO scores and an increase in high-LTV lending.”

Total risk in the portfolio and private segment was 3.1% in fourth quarter of 2019, the highest that figure has been since 2012. 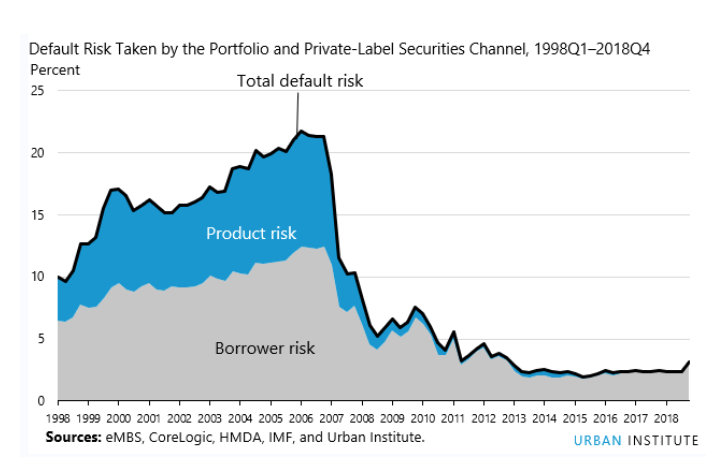 (Click to enlarge. Image courtesy of the Urban Institute.​​​​​​​)

But despite all of those increases, “significant space” still remains to “safely expand the credit box,” the UI said.

Even if the current default risk were doubled across all segments, risk would still be around the pre-crisis standard of 12.5% that existed from 2001 to 2003 for the entire mortgage market.