Just over six months ago, it appeared that refinance demand had all but dried up thanks to mortgage interest rates that were pushing past 4.5%.

But my how the tables have turned.

According to newly released data from Freddie Mac, mortgage rates just experienced the largest one-week decline in a decade, and are now trending back toward percentages that begin with “3” instead of “4.”

Freddie Mac’s report showed that the 30-year fixed-rate mortgage averaged 4.06% in the last week, a massive drop of 22 basis points from the previous week’s total of 4.28%.

To repeat, mortgage rates haven’t been this low in well over a year. Just a few weeks ago, mortgage rates were at 4.41%. But levels that high seem may soon seem like a distant memory if rates continue to trend back down towards the 3% range that many thought was gone forever just a few months ago.

According to Freddie Mac’s chief economist, Sam Khater, the caution about the economy recently laid out by the Federal Reserve sent mortgage rates plummeting.

“The Federal Reserve’s concern about the prospects for slowing economic growth caused investor jitters to drive down mortgage rates by the largest amount in over 10 years,” Khater said. “Despite negative outlooks by some, the economy continues to churn out jobs, which is great for housing demand. We have recently seen home sales start to recover and with this week’s rate drop we expect a continued rise in purchase demand.” 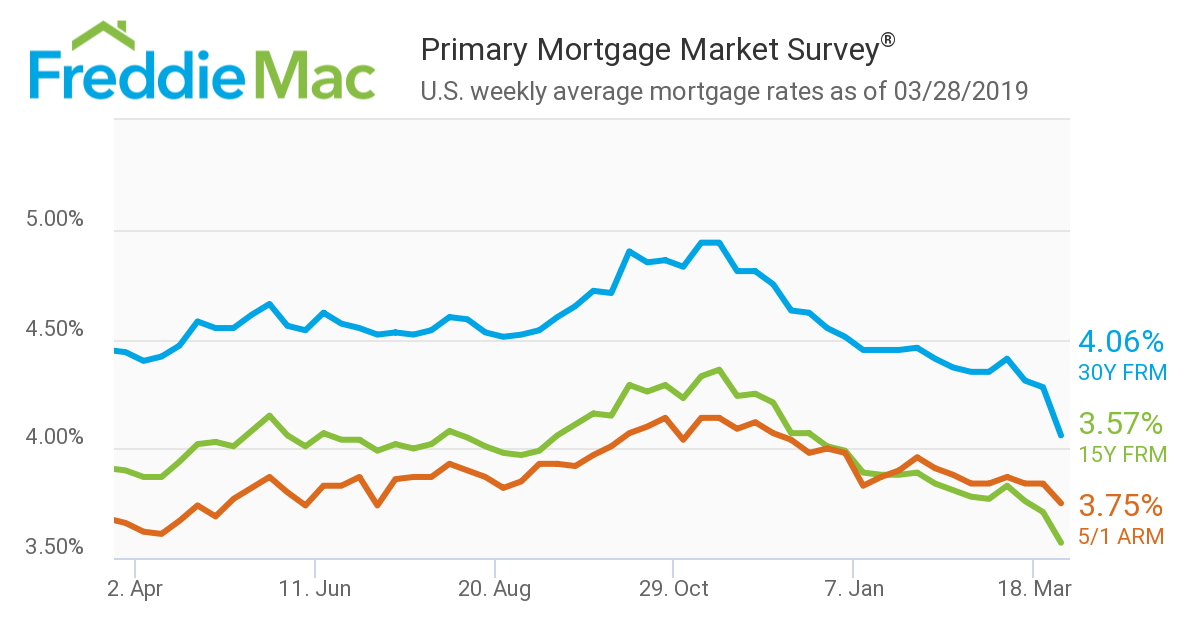 Both the 15-year fixed-rate mortgage and the 5-year Treasury-indexed hybrid adjustable-rate mortgage also fell in the last week, but not as precipitously as the 30-year.