Competing trends heavily influenced the housing market in 2018. We witnessed a surge in Millennial demand against the backdrop of a strong labor market. But mortgage rates rose consistently, increasing the squeeze on affordability and furthering the supply shortage to a historically low level. This made both buyers and sellers increasingly hesitant to participate in the housing market.

The tug-of-war between these competing trends is poised to continue in 2019. Given that, what is the outlook for the housing market, and what does the future hold for consumers and real estate professionals?

There are four major trends that stand out. Let’s take a look:

1. Rates will continue to rise

We’re seeing a transition from a declining-rate to a rising-rate environment, which has been one of the biggest drivers of change in the mortgage market. Mortgage rates are almost a full percentage point higher than a year ago. Without a doubt, this has impacted affordability negatively for both potential and existing homeowners. However, we need to take a pause before asserting that this is entirely bad news.

Rates have been artificially low in the past decade, in part because of the quantitative easing policy implemented by the Fed in response to the Great Recession. In fact, even though rates are rising, it helps to keep in context that they are still below their historic average of 8%. Quantitative easing has kept interest rates low for the past decade, allowing the housing market to recover from the housing crash. But, there is a very good reason why rates are now

rising – they are normalizing against the backdrop of a very strong economy. In 2018, we’ve seen an almost 50-year low in unemployment, and the pace of wage growth increasing toward the end of the year. While wage growth has not fully mitigated the loss of affordability stemming from rising rates, it has helped mitigate declining affordability to some degree.

Here are some predictions we can make when looking ahead to 2019. In 2018, rising rates priced certain potential home buyers out of the market, and they dis-incentivized many existing homeowners from selling their homes. However, the desire for homeownership has not gone away. In fact, according to the American Enterprise Institute’s first-time buyer index, more than half of all homes were purchased by first-time buyers in 2018. Even if rising rates lead to affordability challenges, the reason underpinning the rising rates – a strong economy – may still pave the way for many to realize their American Dream.

2. Low supply will continue to plague the market

While the discussion around rising rates mostly focuses on the impact to first-time buyers, their impact on existing homeowners is just as important. In a rising rate environment, existing homeowners, particularly those that bought or refinanced over the past few years, will become much less likely to sell their homes – after all, why should they buy a new home at a higher interest rate? Unfortunately, this calculation exacerbates the supply shortage that has plagued the market for most of 2018. The vast majority of residential purchase transactions are sales of existing homes, so homeowners’ reluctance to sell their home, combined with historically low inventory, places great pressure on the housing market. Even if there is a surge in demand and a strong economy, buyers can’t buy what’s not for sale.

Naturally, mortgage rates returning to 3.5% would help bring some relief to the market. However, with rates forecast to continue rising, that is unlikely to happen. That leaves us with only one option: an increased supply of new homes. In 2019, we might see more discussion about how to increase supply, including making homebuilding more productive, and overcoming regulatory and zoning challenges around building affordable new homes. Until then, it won’t be an easy decision to sell a home financed with a low mortgage rate, nor will it be easy to buy one. 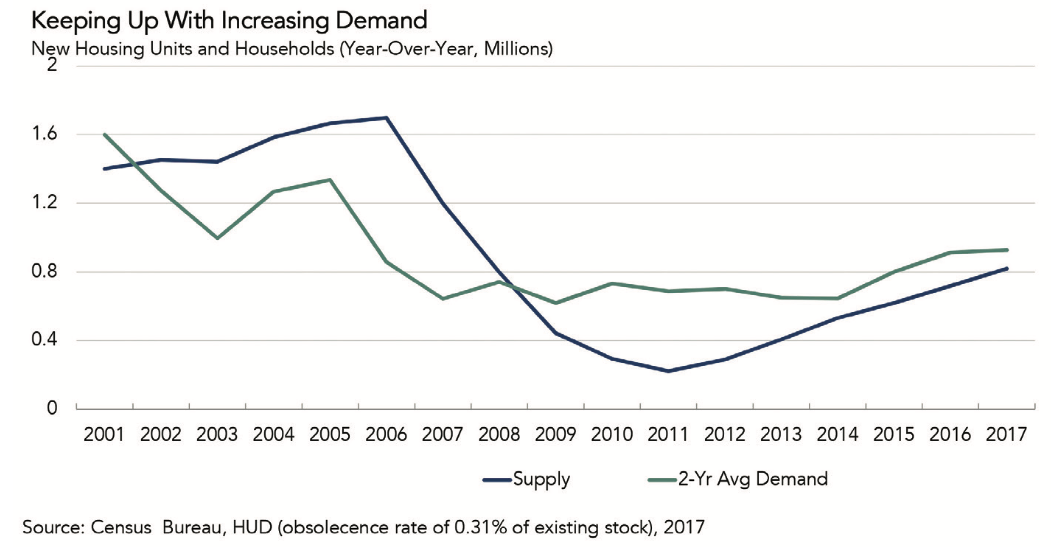 One might ask whether Millennials can afford homeownership. That is not only the wrong assumption, but also the wrong question. Economically speaking, Millennials, who have delayed marriage and having children in favor of education, have the highest average household income across generational cohorts.  And, although marriage and children, arguably the biggest drivers for homeownership, come later in life for Millennials, they are still taking these steps with time. As increasing numbers of Millennials are preparing to tie the knot and have children in 2019, they will be the most important demographic driving homeownership.

First American’s analysis shows that the 80th percentile renter in San Francisco, with a house-buying power of $822,000 and an income of $135,419, can afford to buy only 20% of the available homes. Over the long-run, if affordability challenges in high-priced coastal areas continue, households will migrate from expensive coastal areas to more affordable, up-and-coming cities where homeownership is more achievable. Cities like New York, San Francisco and Seattle will face increasing competition for labor and employers from cities like Austin, Phoenix, Denver and Dallas. Migration will go beyond those seeking affordable homes – employers can migrate too, choosing to relocate to markets with lower housing costs, where they can pay less and still attract qualified employees. Over time, we will see the creation of new employment hubs and housing market growth opportunities in more affordable and homebuilding-amenable locations.

We’re under no illusions that it will be smooth sailing for the housing market. Looking ahead to 2019, affordability challenges stemming from rising rates will continue. This will likely make it more challenging for certain potential buyers to enter the market, not to mention making existing homeowners more reluctant to sell. However, there are some strong currents propelling the housing market forward, including a strong labor market and demand from an influx of well-educated, high-income Millennials seeking the American Dream of homeownership.