The report's results showed that November 2018 saw an annual increase of 5.2% for home prices nationwide, falling from the previous month's report. 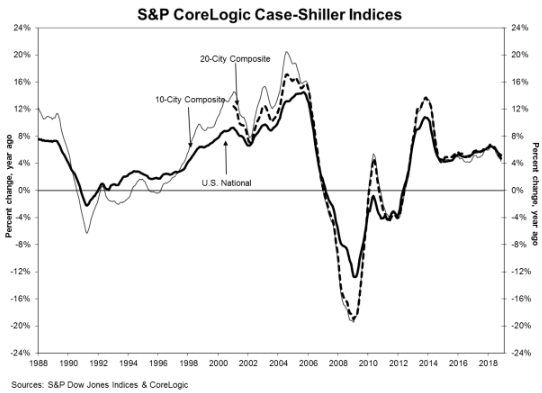 Before seasonal adjustment, the National Index increased 0.1% month over month in November. The 10-City Composite came in at 4.3%, falling from 4.7% the month before. Furthermore, the 20-City Composite posted a 4.7% year-over-year gain, sliding from 5% in October.

According to the report, Las Vegas, Phoenix and Seattle reported the highest year-over-year gains among all of the 20 cities.

“The pace of price increases are being dampened by declining sales of existing homes and weaker affordability,” Blitzer continued. “Sales peaked in November 2017 and drifted down through 2018. Affordability reflects higher prices and increased mortgage rates through much of last year. Following a shift in Fed policy in December, mortgage rates backed off to about 4.45% from 4.95%.”

Blitzer also said housing market conditions are mixed while analysts’ comments express concerns that housing is weakening and could affect the broader economy.

“Current low inventories of homes for sale – about a four-month supply – are supporting home prices. New home construction trends, like sales of existing homes, peaked in late 2017 and are flat to down since then,” Blitzer said. “Stable 2% inflation, continued employment growth, and rising wages are all favorable. Measures of consumer debt and debt service do not suggest any immediate problems.”